The announcement marks the completion of the first phase of the February deal on dismantling North Korea’s nuclear weapons programme.
Fresh talks

Part of the second phase would include working groups to deal with technical aspects of any agreement and improving political relations.

The third phase would require North Korea to hand over fissile nuclear materials and other atomic arms infrastructure.
In Beijing on Wednesday, the two Koreas, the US, China, Japan and Russia began exploring how to scrap Yongbyon and terminate North Korea’s nuclear weapons potential in return for another 950,000 tonnes of oil or equivalent aid.
The fresh round of six-party talks focused on ending North Korea’s uranium programme, a major sticking point with the nuclear powers.

North Korea on Wednesday told other nations involved in disarmament talks in Beijing that it was willing to declare and disable its nuclear facilities this year, the South Korean envoy said.

“North Korea showed its willingness to declare and disable (its nuclear facilities) within the shortest period of time, within this year, or five to six months,” envoy Chun Yung-Woo told reporters.

The US and others say that North Korea has been secretly operating a highly enriched uranium programme in parallel with its plutonium-making facility at Yongbyon.
Both materials can be used to make nuclear warheads. Pyongyang has never admitted to making the highly enriched uranium.
US proposal
Christopher Hill, the chief US envoy in Beijing, said there was hope of getting North Korea to agree to a disarmament schedule.
Hill said he met Kim Kye-gwan, the North’s chief negotiator, late on Tuesday to propose a timetable that would conclude the second phase of disarmament by the end of the year.
“We all know that we’ve got a long road ahead of us with many steps,” he said. “Maybe we could try to agree on getting these next phase things done in calendar year 07.”
He said on Tuesday that the North Korean delegation appeared receptive to his proposal, adding: “I think we’re on the same ballpark.”
In February North Korea agreed to close the Yongbyon plant in return for 50,000 tonnes of heavy fuel oil, which began moving there from South Korea last week.
The US state department on Monday said the closure had brightened prospects for a first-ever ministerial meeting of the six nations, a step up from the envoy level that is currently employed.
Source: News Agencies 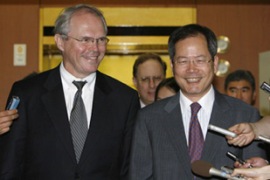 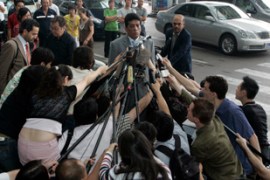