Erdogan called on people to vote for the pro-business AK for the continuation of economic and political stability in Turkey.

“During our term in office, the national economy grew to $400bn from $181bn,” he said in a televised speech.

Turkish financial markets have soared in the past week, partly on the assumption that the AK will stay in power, but will lack the 367 seats needed to change the constitution, a move they fear would spark a political crisis.

The party has presided over strong economic growth, falling inflation and the historic launch of European Union accession talks since being voted into power in November 2002.

But the secularist establishment, including powerful generals, remains deeply distrustful of the party’s intentions. 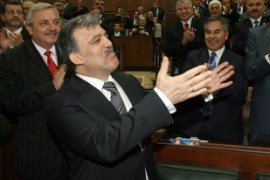