Abdelrahman Shalgham, the Libyan foreign minister, said the case, however, was still not closed and that the ball was in the court of Bulgaria and the EU.
He said Tripoli was still waiting for guarantees over the treatment of the infected children. Fifty-five of them have already died.
Families of the victims have started to receive compensation under a deal struck with the help of the son of Muammar Gaddafi, the Libyan president.
A further obstacle was cleared on Wednesday when another Libyan court cleared the six of defamation, a charge brought by a senior police officer after they claimed that their initial “confessions” had been extracted under torture.
Libyan money

Shalgham said that talks would take place shortly on how existing EU commitments will be met. He did not provide further details.

A compensation fund for the children, who were infected in a hospital in the Mediterranean city of Benghazi, was set up in 2005 by Tripoli and Sofia under EU auspices.

The Kadhafi Foundation, which has been involved in mediating the crisis, said the compensation amounted to about one million dollars per child.

“The question of time is important, but it must be addressed by all parties and not just Libya,” Shalgham said.

In an interview with Bulgarian Radio, Benita Ferrero-Waldner, the  EU external affairs commissioner, said that the bulk of the compensation paid to the families was “Libyan money”.

“I think we on our side have done the part of our deal, which is not paying the big money. This is indeed by the Kadhafi Foundation and this is Libyan money,” she said.

Ferrero-Waldner said the main EU contribution was working for an “action plan” to upgrade the hospital.

“Today this is a hospital that can be compared with European standards. Before it was not,” she said.

Bulgaria, meanwhile, said it had begun steps to secure the transfer of the medics, and that the relevant documents would be sent to Tripoli on Wednesday.

Boris Velchev, the chief prosecutor said: “The procedure around the transfer … is already under way. I will request that the medical workers be allowed to serve out their sentences at home,”

Speculation was rife in local media that if the six were transferred to Bulgaria, Georgy Parvanov, the Bulgarian president, would pardon them immediately. 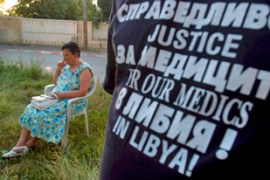