By
“We will always be standing, never on our knees,” he said.
Forced off air
When RCTV’s licence ran out on May 27, Chavez handed the network’s open airwaves signal to a state-controlled channel.
RCTV’s executives argued that Chavez’s decision not to renew RCTV’s broadcasting licence was illegal.
The station, which has been critical of the president, is waging a legal battle to regain its license so it can once again reach a nationwide audience.
Before the channel went off air, opposition groups and supporters of the channel staged demonstrations, arguing Chavez was forcing the channel to close in order to silence his critics.
International press freedom groups, the EU, the US government, Human Rights Watch and others have expressed concern that the move against RCTV threatens press freedom.
But Chavez denies his government has limited freedom of expression, arguing that his decision to turn RCTV’s signal over to a public-service channel was part of a wider effort aimed at democratising the airwaves.
Pedro Carreno, Venezuela’s justice minister, said RCTV’s move to cable and satellite television was “a clear demonstration that Venezuela’s government does not infringe on any right”.
Cable and satellite television cost roughly US$20 a month in Venezuela, more than many families can afford, and reach only 30 per cent of households.
Source : News Agencies 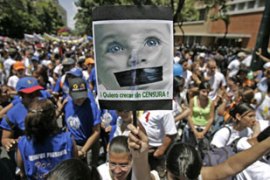 Venezuela’s president says protesters are being manipulated by his rivals. 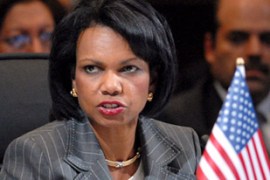 US and Venezuela in spat over RCTV

Rice says forcing station off air undemocratic but Venezuela accuses US of hypocrisy. 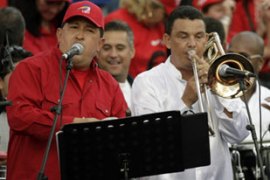 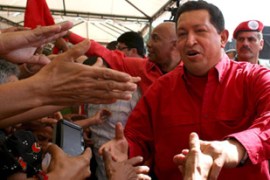