Tokyo Electric Power Co (Tepco) said the Kashiwazaki Kariwa nuclear power plant, the world’s largest in terms of power output capacity, leaked about 1.2 cubic metres of water in the building housing one of its seven reactors after the first tremor.

Jun Oshima, a Tepco official, said the water contained a tiny amount of radioactive material and is believed to have flushed into the sea. 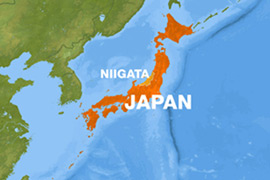 The quake was centred around
60km southwest of Niigata

A company statement said the leak had stopped and that there had been no “significant change” in the sea water under surveillance and no effect on the environment.

“The radioactivity is one-billionth of the legal limit,” Oshima said.
The reactor had been shut down at the time of the leak. The quake triggered a fire at an electrical transformer at the plant but the reactor was not damaged.
Kyodo News agency reported more than 900 people were hurt, with injuries including broken bones, cuts and bruises, and some 780 buildings sustained damage, more than 300 of them destroyed.
Four women and three men, in their 70s and 80s, died in the quake, most of them after being crushed when buildings collapsed on them in the quake, National Police Agency officials in Tokyo said.
Aftershocks
Powerful aftershocks followed the initial quake, with officials saying they expect further shocks in the coming week.
The first tremor caused buildings to sway in Tokyo, trains were stopped and nuclear power reactors in the Niigata area were shut down for checks.

Tsunami warnings sounded along affected costal stretches, with a surge of 50cm predicted, but they were later withdrawn.

About 10,000 people in the quake zone were evacuated from their homes, according to media reports.
Hirohiko Iizumida, Niigata governor, said that getting food and water supplies to evacuation centres was a chief concern.
Rescue workers dug through flattened buildings in hopes of pulling victims alive from the wreckage.
Gas leak
The force of the quake buckled seaside roads and bridges, and one-metre-wide fissures opened up in the ground along the coastline.

Bullet trains in the area were also briefly halted and one train was derailed as it stopped at a station, although no injuries were reported.
Water and gas services for Kashiwazaki’s 35,000 households were suspended after reports of gas leaks, while nearly 24,000 households in the quake zone were without power as of Monday afternoon.
The tremor struck at 10:13 am (01:13 GMT) and was centred around 60km southwest of Niigata.

The focus of the quake was some 10km below the earth’s surface, Japan’s meteorological agency said.

Japan sits atop four tectonic plates and is one of the world’s most earthquake-prone countries.

The last major quake to hit killed some 142,000 people in 1923, and experts say the capital has a 90 per cent chance of suffering a major quake in the next 50 years.
Source : News Agencies 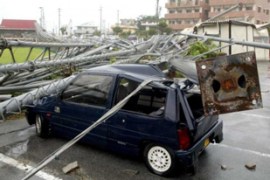