South Korea have suffered a shock 2-1 loss at the hands of Bahrain to leave their Asian Cup dreams in tatters.

After Kim Do-heon gave Korea an early lead, Bahrain got back on level terms just before the break through Salman Isa Ghuloom.

Worse was to follow for the 2002 World Cup semi-finalists in the second half.

A woeful back pass from Kim Jung-woo was picked up by Talal Yusuf.

He danced into the box and the ball broke to Ismaeel Abdullatif, who fired gleefully past Lee Woon-jae before running into the waiting arms of coach Milan Macala on the sidelines.

Macala, who has tasted victory over Korea twice before as coach, said this win was the sweetest.

“Today was the most important win,” the Czech said.

“We played well in the first half but we were under pressure in the second for the full 45 minutes.”

Macala said he had to work to pick his players up after their surprise 2-1 loss to Indonesia in the Group D opener.

“We are still alive. Now we can look forward to a big game against our big opponents from the gulf, Saudi Arabia.”

Kim Do-heon volleyed home from close range to give South Korea the lead, but they failed to press home the early advantage and paid for it with a moment of slack defending.

Mohamed Hosain’s chipped free kick floated over a static Korean defense and an unmarked Ghuloom beat Lee at the near post just two minutes before the break.

South Korea were a far more urgent side in the second half and carved out a series of chances, the best of which saw Middlesbrough striker Lee Dong-gook dally with only the keeper to beat and his laboured effort was cleared by a backtracking Bahrain defense.

The Gulf side soaked up the pressure then hit Korea with a sucker punch.

A bemused Korea coach Pim Verbeek insisted his side had given their all.

“It’s no surprise that my players are completely finished in there,” he said.

“We played well in the second half and I was waiting for us to go 2-1 up. I never expected them to score a goal.”

The Dutchman acknowledged the precarious position his side are in but maintained that qualification was still possible, despite being at the bottom of the group.

Korea have to beat co-hosts Indonesia by two clear goals and hope that other results go their way. 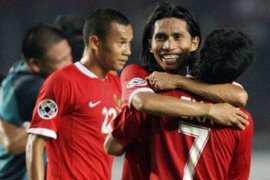 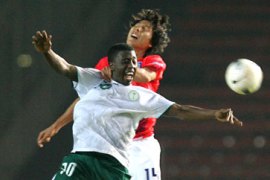 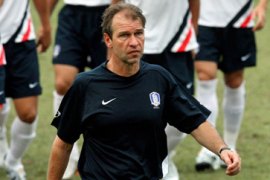