What was once lush pasture, farmed by nomadic tribesmen for centuries, has now been eradicated by desertification.

In 30 years, sands that have blown across Mongolia by seasonal wind have eaten more than two million hectares of Mongolian grassland.

Al Jazeera’s Tony Cheng discovers why, for many Mongolians, the traditional way of life is no longer possible.

The Gobi desert, already one of the largest in the world, is growing fast, and the Mongolian ecosystem has been badly damaged by sudden storms and temperature drops on the tundra.

Namjildorj, an environmental ranger on the Mongolian steppe, said: “This whole thing is very obvious. In this area in the south side behind me there were more than a hectare of trees … there’s absolutely nothing left of them now. This has happened within 16 years.”

Shoko Noda, from the UN Development Fund, said: “The evidence is all too easy to find throughout the country, as more and more of the fine grass gets swallowed up by the sand.”

Worse still, the effects of global economics multiply the suffering caused by the desert wind.

Nomads that have roamed through the plains rely on their herds of goats, sheep and cattle.

Generations have been raised in practices of animal husbandry that have changed little over time.

With cashmere in great demand, the herds of goats that produce it have ballooned. Their ferocious appetite, and ability to rip grass from its roots, have left vast swathes of land devastated.

Professor Bazardorj Davaajav, from the university of Mongolia, said: “Mongolian desertification clearly has something to do with global warming and that can be seen at a global level. People in the provinces are leaving the places they traditionally live.”

For Mongolians, whose traditional way of life has barely changed over time, the influence of the outside world has finally caught up. 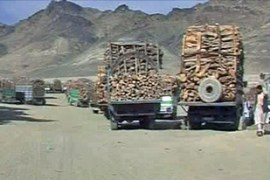 Politicians from the world’s most polluting countries have teamed up with representatives of big business at a conference in Sydney to look at new technology-led ways of combating global warming.

A deteriorating environment could drive about 50 million people from their homes by 2010 and the world needs to define a new category of environmental refugee, a UN study says.