The attack is the latest deadly incident to hit the region over the last few days.

Pervez Musharraf, the Pakistani president, has provoked anger in the region after this week’s army assault on the pro-Taliban mosque complex in Islamabad that left 86 people dead.

Musharraf however has warned he would root out what he calls extremists and has deployed extra troops to the border areas with Afghanistan, remote and lawless regions that are believed to have become hideouts for the Taliban and Al-Qaeda.

Kamal Hyder, Al Jazeera’s correspondent in northwest Pakistan, says many analysts feel Musharraf is plotting a dangerous course in the region where the military is at risk of confronting its own people.

Hyder says his policies are not going down well and there is a definite risk that attacks in the area will increase.

Thousands of Islamic protesters on Friday called for jihad and burnt effigies of Musharraf and a puppet of “Uncle Sam”.

The Pakistani president is a strong supporter of the US-led “war on terror.”

At least 12 soldiers killed as latest blasts hit a convoy in the northwest. 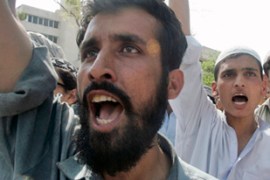 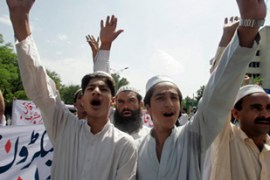 Police step up security across the country as protesters denounce Red Mosque raid. 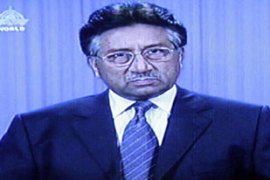