China, runners-up at the 2004 Asian Cup, showed that their appearance in the final last time around was no fluke with a thoroughly convincing 5-1 win over joint-hosts Malaysia in the opening Group C match at the Bukit Jalil National Stadium in Kuala Lumpur on Tuesday night.

First half goals for China by forward Peng Han and midfielder Jiayi Shao were added to in the second half by a Dong Wang double and Han also with his second.

Malaysia pulled a late goal back through substitute Indra Putra Mahayuddin, and although they showed some good touches on the ball, they were clearly out-muscled and outplayed by the stronger Chinese side.

Temperatures and humidity were not as bad as expected when Syrian referee Muhsen Basma blew the opening whistle, however both sides would still be in for an energy-sapping 90 minutes in a reasonably high-paced and entertaining match.

China went ahead in the 14th minute when Shao fed fellow midfielder Wang a lovely ball, before the Changchun Yatai player put in an excellent cross for Han to meet with a towering header over Malaysian defender Zamani Misbah to score at the far post.

Much of the attack went down China’s right flank through the pace and skill of the impressive Wang.

China defender Weifeng Li was called for a dubious handball in the 23rd minute, with Malaysian midfielder Hardi Jaafar whipping in a decent free kick on target, but keeper Lei Lei Li had it well covered.

On the half hour mark Wang again provided a volleyed cross from the right only to see Jianqing Mao send his stabbed shot over the bar from less than three metres out and right in front of goal.

In the 36th minute China had their second when a Zhi Zheng cross from the left found Shao unmarked and at full stretch to tap in at the far post.

Malaysia had the chance to pull a goal back just before halftime when Akmal Rizal bamboozled his marker and sent in a low cross only for defender Yoakun Zhang to snatch the ball off Jaafar’s boot for a corner.

The onslaught continued in the second half when Wang scored a deserved goal in the 51st minute after a clever exchange of passes with Zheng resulted in a shot deflecting off a Malaysian defender and wrong-footing Azizon.

Just four minutes later the China forwards combined for their side’s fourth goal when Mao’s floating cross was met by Han ghosting in unmarked at the far post for another easy tap in.

Two-goal hero Han was substituted in the 72nd minute by coach Zhu Guanghu to a standing ovation, but only from the single bay of China supporters in the expansive stadium.

However the loudest cheer of the night came just a minute later when Malaysian substitute Indra Putra Mahayuddin struck a superb goal after some clever interplay with Jaafar at the top of the box.

It only made the score slightly more respectable at 4-1, but the noise from the home crowd was utterly deafening.

The crowd came to life after the unlikely strike as the hosts looked to finish off strongly, but Wang silenced the home supporters for good with the final touch of the match when he headed a looping ball over the hapless Azizon to make it 5-1.

Other than some speculative shooting the home side didn’t have many chances, and officials will be hoping that the heavy defeat first up doesn’t keep the local fans away for Malaysia’s next two matches. 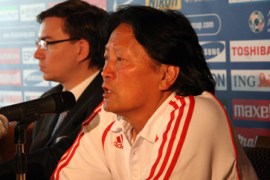 China aim to go one better

Coach Zhu Guanghu and key player Sun Jihai are upbeat ahead of their opening match.