China, who are about to commence their ninth consecutive AFC Asian Cup campaign, will be looking to go one better than last year when they were defeated 3-1 by Japan in the final on their home turf in Beijing.

The Chinese have an impressive record at the Asian Cup tournament, having finished in the top four on six out of nine appearances, including two third placings in 1976 and 1992, and another runners-up finish in 1984.

Coach Zhu Guanghu has had plenty of time to prepare his squad, as he has been at the helm of the national team since March 2005, and was under no illusion as to the possible hurdle his side could face in their first match against joint-hosts Malaysia in Kuala Lumpur on Tuesday.

“The opening match is always difficult, especially when playing the host,” Zhu told a press conference on Monday.

“I do think all the teams in final 16 are very strong teams and everyone has a chance to go through to the quarter-finals.”

After watching other hosts Thailand secure a 1-1 draw against Iraq and Vietnam shock UAE with a 2-0 win, Zhu was wary of Malaysia’s threat at home on the Bukit Jalil National Stadium.

“The Thai and Vietnam performances were very good, and we’ll have to prepare well for Malaysia tomorrow,” said the 57-year-old.

In the past, Zhu has been criticised by China fans for imposing an overly defensive style of play on the team, but with the likes of Manchester United striker Dong Fangzhou, Energie Cottbus midfielder Shao Jia-Yi and attack-minded midfielder Zheng Zhi in the squad, the coach may look to let his players loose.

“It depends on the opponents, it should be balanced,” Zhu said when quizzed about his proposed tactics for the tournament.

Defense may indeed be an issue for China, and that’s where experienced Manchester City utility Sun Jihai could be a force for his national team.

Sun is coming off an injury plagued season and has added incentive to impress at the Asian Cup with new City manager Sven Goran Eriksson sure to be monitoring his Chinese star’s progress.

“After the season I had a one month holiday and then prepared by myself for two weeks, and then with the team for two weeks, so I’m ready for this competition,” Sun said.

“I think both teams are expecting a good result from the match and we’ll guarantee to show you a fantastic competition tomorrow.

“I’ll be doing my best to play for my nation, and I’ll show my skills as a reminder to the new manager.”

China topped their group at the 2004 edition of the tournament as they got the better of Indonesia and Qatar as well as drawing 2-2 with Bahrain.

This time China’s first round opponents are far more difficult, as they face three-time champions Iran and fifth-ranked Asian side Uzbekistan after their clash with the exuberant Malaysia.

Another appearance in the final will seem a long way off for Zhu’s team if they don’t get a positive result in their opening match of the tournament. 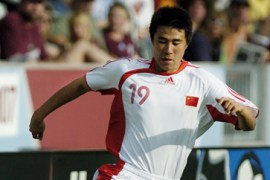