The two remaining teams to play in Group D were both in the mood for bold predictions ahead of their showdown on Wednesday in Jakarta.

As South Korea were predicting it would end a 47-year drought and win this year’s Asian Cup, Saudi Arabia were insisting they were on course for a fourth title.

At a lively pre-match media conference, Saudi Arabia’s coach Helio Cesar dos Anjos had to defend his decision not to include former AFC Player of the Year Hamad Al Montashari in the team.

“It was a technical decision,” he said before his first competitive tie in charge of the Saudi team.

“I did what was most important for Saudi Arabia at this moment.”

The Brazilian also grumbled about the state of the training pitches in Indonesia as well as the turf at the 88,000-capacity Gelora Bung Karno Stadium that will host the match.

“We will bring the cup back to Korea,” said Lee.

“All players understand that.”

South Korea has underperformed on the international stage since reaching the semifinals of the World Cup in 2002.

Amid high expectations of victory, it was beaten by Iran in the quarter finals of the last Asian Cup in China in 2004.

Dutch Coach Pim Verbeek has been unable to pick Manchester United midfielder Park Ji-sung and Tottenham Hotspur left-back Lee Young-pyo due to injuries, but has included Middlesbrough striker Lee Dong-gook in the squad.

But a relaxed Verbeek said the squad had enough depth to absorb any injuries sustained in the six matches in 18 days needed to win the competition.

“I have a very strong selection,” he said.

“Our preparation was excellent, every minute was well used. We are ready to play.”

He said the steamy temperatures in tropical Indonesia were an “enemy”, but expressed confidence his team would not wilt toward the end of the 90 minutes as other sides have down in the opening matches.

“One of the strengths of the Koreans is that they will never give up,” he said.

Saudi Arabia have won the cup three times, the last time 11 years ago.

But like South Korea, it underperformed in China, crashing out of the competition after only gaining one point.

Dos Anjos also said the sticky conditions were “a bit of a problem.”

Still, he said “we have the same dream as other teams. We are here to win the Cup.” 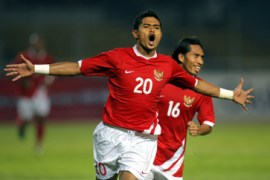 Bahrain, Indonesia, Korea Republic and Saudi Arabia have been drawn in Group D based in Jakarta.