Accra is the final stage of President Gaddafi’s week-long tour of western Africa, which has also included Mali, Guinea, Sierra Leone and the Ivory Coast.

At each stop he has held rallies calling for the establishment of United States of Africa and a single government.

“How can an African country face a Europe that is united, negotiate with the USA, Japan or China,” he asked, saying that with a single government, Africa would be on an equal footing with them.

“If the African masses are enlightened and aware … then Africa will come into being,” he said. “Those at the summit should hear the voice of the masses.”

He also believes the move would staunch the flow of migrants to Europe, by exploiting its own resources and creating jobs in Africa.

Although the African Union was only formed in 2001, the idea was first suggested more than 50 years ago.

African leaders including Kwame Nkrumah, the late Ghanaian president, and Julius Nyerere, the first president of Tanzania, were both advocates of a single government.

The idea is said to have first been mooted at the fifth pan-African Congress held in England in 1945, and led to the formation of the Organisation of African Unity (OAU) in 1963.

The Libyan president’s enthusiasm for a single federal government fits with the possible future development of the African Union (AU).

The body was formed from the amalgamation of the African Economic Community (AEC) and the OAU.

Its remit is to promote unity and solidarity, democracy, economic development and international co-operation, especially by trying to end conflict within the continent.

Longer term, the AU plans include a single currency and integrated defence force, as well as proposals for a single cabinet and head of state.

But President Gaddafi faces difficulties in promoting his plan.

While some governments, including those of Senegal and Zimbabwe, are said to be in favour of such a move, others such as South Africa and Uganda reject it.

Others say there must be gradual steps towards unity, starting with the consolidation of existing economic blocs.

Critics of the African Union say it has proved unable to tackle some of its existing aims.

They point to a range of conflicts, ethnic and religious diversity and the unequal distribution of wealth across the continent as evidence that it would be almost impossible to bring together Africa’s 900 million inhabitants.

Some question how a federal government would be able to enforce policies when the countries that make up Africa find it difficult to solve them individually.

Even within the cheering audience in Accra there were sceptics. “It is a premature movement,” John Awesi Amponsah, a 27-year-old student, said. “We have lots of ethnic, financial and economic hassles which need to be addressed before we think of a united African continent.” 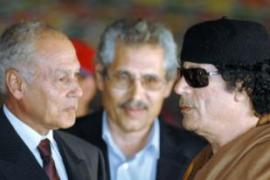 Libyan leader says world should stay out as opposition fighters do not want solution. 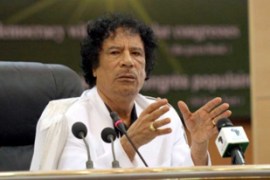 Negroponte is the highest-ranking American official to visit Libya in half a century.