But he said they would not set a specific target, such as the 50 per cent cut by 2050 that was proposed by Angela Merkel, the German chancellor.

At a morning session on economic issues, Merkel sat between Bush and Putin, who had engaged in public sparring on US missile shield plans in the run-up to the summit.

The two presidents, smiling and looking relaxed, have not met face-to-face since Putin launched an attack on the Bush administration.

Putin had accused the US, in February, of trying to force its will on the world and become its “single master”.

“There’s a lot of constructive work we can do and so I’m looking forward to my dialogue with Vladimir Putin this afternoon,” Bush said.

Bush said he would reiterate to Putin his proposal that Russia send generals and scientists to the US to reassure them on plans to put a radar system in the Czech Republic and interceptor missiles in Poland.

Washington says the shield is intended as a defence against “rogue” states such as Iran and North Korea and has urged Russia to co-operate.

Moscow has rebuffed the US proposal amid suspicions that the shields could be fitted with attack missiles or used for spying.

Security remains tight around the summit at a luxury hotel in Heiligendamm.

Police intercepted three speed boats that breached a coastal security zone around the Baltic sea resort, ramming one of the rubber dinghies after a high-speed chase. 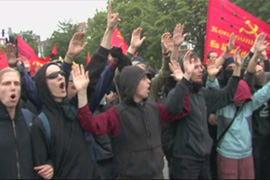 Protesters have gathered to voice
their concerns to the world leaders

A spokesman for Greenpeace, the environmental pressure group, said the boats had attempted to deliver a message to G8 leaders.

Four protesters ended up in the water after the chase.

A banner saying “G8 act now” had been displayed on one of the boats.

Nearby, thousands of anti-capitalist protesters converged for a second day on a high-security fence surrounding the summit complex.

They left makeshift camps where they had spent the night to march across fields towards the fence.

Police said there had been no major clashes overnight and described the situation around the resort as quiet. About 16,000 security personnel are in the area.

Germany‘s constitutional court has banned demonstrations near the 12km fence that is topped with barbed wire.

About 160 protesters were arrested on Wednesday, when 10,000 protesters clashed with police and blockaded roads leading to Heiligendamm.

Police used water cannon to clear roadblocks and said eight officers had been injured in the clashes.

Organisers expect 70,000 people to attend an anti-G8 concert in the nearby city of Rostock later on Thursday. 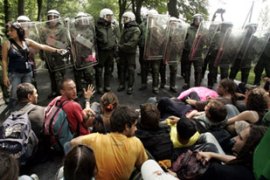 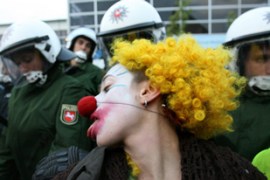 G8 will not set climate goals

The US will not agree to long-term climate targets until all nations are involved. 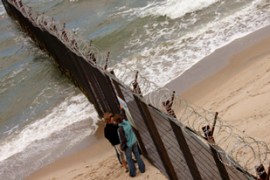 Routes to Heiligendamm in Germany shut after a day of violent protests in Rostock. 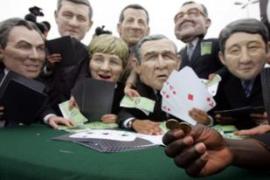