It feels a bit like déjà vu. Before each Olympics, there are predictions of problems that will de-rail the greatest show on earth.

The controversy usually takes place in the months leading up to the start of the games, and Beijing 2008, is no different in that regard.

Their controversy is air pollution.

Chinese authorities are using the Olympic games to send a message to the world, a message that says China is open to the world and a demonstration of what the country can achieve.

So far what they have achieved is quite staggering.

If the Olympic stadiums that are being built are anything to go by, the games will be a massive success.

The showpiece of the main Olympic Green precinct is the 91,000 capacity National Stadium which is still under construction, but will stage the opening and closing ceremonies, athletics and some football.

The design of the so called Bird’s Nest is dramatic to say the least, and it’s a spectacular sight with its beams bending around each other like an external skeleton.

Right next door is another facility with its own nickname – the National National, dubbed the Water Cube because of its exterior bubble design.

It’s a giant blue box with no windows, and its cladding is supposed to replicate the natural formation of soap bubbles.

Once construction is completed, the 3,000 cells will have air constantly pumped through them, and they’ll also allow natural light to filter through, prompting the architects to trumpet the design as environmentally friendly.

Construction of facilities has caused headaches for Olympic organisers on many occasions, but usually it’s because they run behind schedule.

Beijing has been quite the opposite.

In fact they started building stadiums so quickly, that the International Olympic Committee told them to slow down because they were concerned about the high costs associated with maintaining them.

So, construction goes on, with most facilities due for completion by the end of this year, which will enable test events to be held.

But while the facilities should be of the highest standard, the quality of the air the athletes will be breathing may not be.

Beijing is one of the most polluted cities in the world and the appalling air quality is caused by factories, millions of vehicles clogging the city’s streets, and thousands of construction sites kicking up dust.

During their most recent visit to the Chinese capital, the International Olympic Committee reiterated the fact that pollution remains their number one concern.

Dutchman Hein Verbruggen is the IOC’s main man on the ground and is in charge of liaising with the Beijing Organising Committee.

Both parties are now talking about contingency plans to tackle the pollution, he says.

“We’ve had meetings with their experts and they use a lot of people from abroad for this which is a good thing too,” says Verbruggen.

“We feel confident that the athletes can perform here in a good environment.”

But there are plenty of organisations and national teams that don’t share the IOC’s optimism, the latest being Australia.

Their national Olympic Committee is warning its athletes to do most of their training outside Beijing next year, staying away from the heat and pollution until just a few days before they are due to compete.

The contingency plans the IOC talks of could include simply shutting down heavy industry during the Olympics, and ordering millions of cars off the roads, both of which it seems, the Chinese are willing to do.

Wang Hui is one of the main front people for the Beijing Olympic Games Organising Committee, and is well used to fielding questions about the environment.

She says city officials are on top of the situation and are making improvements, evident in the number of ‘blue sky’ days the city now enjoys each year.

Ironically, when the IOC last visited Beijing  in April, they enjoyed several blue sky days, but as soon as they left the city, the heavy air pollution descended again.

Ordering the public to keep their cars at home, will not only help the pollution, but also the horrendous traffic, which can result in what should be relatively short journeys across the city taking hours.

That problem will be much easier to solve than the pollution.

After all, predictions of traffic congestion choking Olympic cities is nothing new.

For local residents, traffic may well still be a headache while the games are on.

But for athletes, officials and media – the so-called Oympic family – special lanes are set up on all the main roads to and from venues, allowing vehicles displaying the appropriate accreditation to move about the city more easily.

Those who are nervous about the Beijing Olympics, and how successful they will or will not be, need only to cast their minds back four years.

Week after week leading up to the Athens games, there were headlines around the world, predicting a shambles.

There were massive construction delays, prompting rumours that the IOC were threatening to take the games away from the Greeks and stage them in Sydney again.

But in a final push for the line, Athens got there, and staged a very successful Olympics.

It would be a surprise if come the day of the closing ceremony next year, we weren’t saying similar things about Beijing. 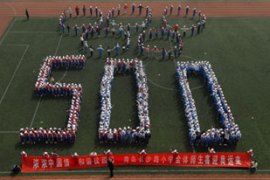 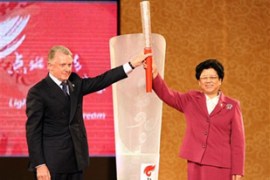 Taipei backs out from relay route announced in Beijing amid huge fanfare.