Many schools had been closed due to teacher walkouts and public hospitals were operating with skeleton staffing.
The work stoppage had been seen as an embarrassment for the ruling African National Congress that overshadowing the start of a policy conference which began on the outskirts of Johannesburg on Wednesday.
Poor ‘abandoned’
Unions accuse Thabo Mbeki, the president, of abandoning the poor through his pro-business policies. South Africa’s economy is booming but civil servants have complained their wages can barely keep up with rising prices.
The government – with a wary eye on rising inflation pressures – stood firm on an improved offer of 7.5 per cent.

It was not yet clear if political damage had been done to Mbeki’s presidency or his status as ANC leader by the strike.

Jacob Zuma, ANC deputy president and widely tipped to replace Mbeki at the party’s helm later this year, said earlier this month that the strike could and should have been avoided.
The strike focused attention on growing labour discontent over the president’s strategy, which has helped turn South Africa into an economic powerhouse but failed to conquer widespread poverty and high unemployment left by apartheid.
July deadline
Some unions accepted the government pay rise offer while others were still consulting their members on a mandate, the Cosatu statement said.
Unions have until July 20 to sign the government’s offer and make the settlement official.
Two of the biggest teachers’ unions are among those that have indicated they will not sign the agreement.
Dave Balt, president of the National Professional Teachers’ Union (Naptosa), said discussions over compensation for workers would take place over the next three months.
“Obviously, it will be a painful experience,” he said at a news conference.
Source: News Agencies 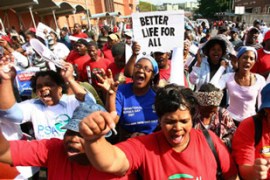 Labour unions in South Africa given 21 days to accept a 7.5 per cent pay deal.

The government and the striking unions agree to postpone talks till Friday. 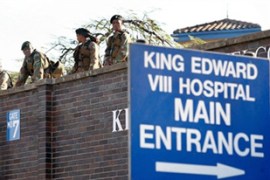