The storm was “likely to cause widespread destruction and coastal flooding along Baluchistan coast due to extremely heavy rainfall, gale [force] winds and associated storm surge”, Qamar-uz-Zaman Chaudhry, director-general of the Pakistan meteorological department, said on Tuesday.
Subsiding
He said the storm’s intensity was decelerating and would subside by evening.
Most of the 120,000 residents of the southwestern port city of Gwadar were moved to higher ground, Abdul Ghaffar Hoth, the city’s mayor, said.
People from other smaller towns were also moved inland to escape the cyclone.

“We have imposed an emergency in the district and asked the army and other forces to be on alert,” he said.

At least three small boats were reported to have sunk and 18 fishing boats were missing.

Navy rescue
A Pakistan navy official said 75 people stranded on four floundering vessels were rescued using helicopters.
Chaudhry said that the “worst appears to be over” for southern Sindh province, which was battered by the storm at the weekend, but that widespread rains would continue until late on Tuesday.

In Karachi, the clean-up was under way after the weekend storm, but many areas remained without electricity or drinking water, four people including an eight-year-old boy were electrocuted by fallen power lines and several riots broke out over the tense situation.

Al Jazeera’s Kamal Hyder said in Karachi: “The water resources of the city are badly contaminated, electric poles are down, telecommunications are down.
“The biggest concern now is that epidemics may follow if the clean-up is not done properly.”
Rains and floods also killed 38 people in neighbouring India over the weekend, raising the toll to 129 since the monsoon season set in four weeks ago, according to official reports.
The United Nations has offered to assist in national and local emergency relief efforts.
Source : Al Jazeera, News Agencies 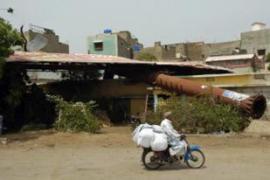 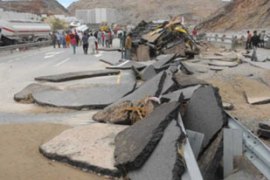 More than 60 people are confirmed dead by the storm that swept parts of Iran and Oman. 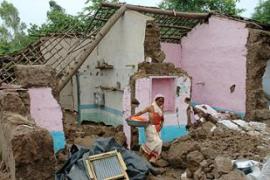