May 2: The Labour party wins the general election and gains a majority in the House of Commons with 179 seats. At 43, Blair becomes the youngest British prime minister since 1812.

May 6: Britain’s central bank, the Bank of England, is given power to set interest rates.

August 31: Blair takes the lead after the death of Diana, Princess of Wales, calling her “the people’s princess”.

April 10: The Good Friday peace accord is signed, allowing power-sharing between Protestants and Catholics in Northern Ireland, decommissioning of paramilitary weapons and the release of militants from prison.

May 26: A devolved Welsh assembly opens in Cardiff.

July 9: The Scottish parliament sits in Edinburgh for the first time since 1707.

May 20: Blair becomes the first British prime minister for more than 150 years to become a father in office when his wife, Cherie Booth, gives birth to their fourth child, Leo.

June 8: Labour wins a second term with a majority of 167.

September 11: After al-Qaeda attacks on the US, Blair gives his total support to George Bush, the US president.

October 7: British troops take part in US-led, Nato-backed attacks against the Taliban and al-Qaeda in Afghanistan.

October 14: London resumes direct control of Northern Ireland after allegations of a republican spy-ring operating in the Belfast assembly.

February 16: An estimated one million people protest in London against war in Iraq in the biggest march in British history.

May 26: The BBC says the British government exaggerated intelligence claims about Iraq’s weapons of mass destruction, the basis for going to war.

October 1: Blair says the 2005 general election will be his last, but he intends to serve a full third term.

May 5: Labour wins a third term with a much-reduced majority of 66.

July 7: Fifty-six people are killed and more than 700 injured when four suicide bombers blow themselves up on the London public transport system.

March 21: Police begin the “cash for honours” inquiry into whether political parties accepted loans from wealthy donors in return for places in the unelected upper House of Lords.

September 7: Blair is forced into saying he will step down within a year after Labour opposition to his stance over Israel’s bombing of Lebanon.

December 14: Blair is questioned by police over “cash for honours”, making him the first serving prime minister to be questioned as part of a criminal inquiry.

May 1: Blair says ally-turned-foe chancellor Gordon Brown would make a “great prime minister,” and confirms he will clarify his departure plans in coming days.

May 10: Blair to announce date he will stand down as Labour party leader and prime minister.

May 19: Blair pays his last visit to iraq as prime minister.

June 20: Al Jazeera reports exclusively that Blair is likely to become the Middle east Quartet’s new envoy after he steps down.

June 27: Blair’s last day as prime minister as he hands over to Gordon Brown. 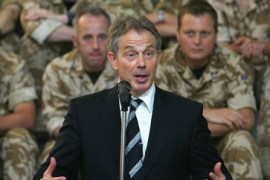 The departing UK prime minister leaves the position with the Middle East in crisis. 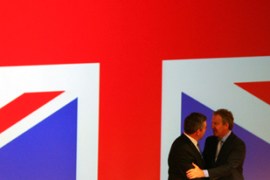 Brown takes over Labour from Blair

Britain’s prime-minister-designate vows to “learn the lessons” of the war in Iraq.