Al Jazeera has uncovered evidence that Taliban fighters are now in effective control of large parts of a key province in southwest Afghanistan, despite recent claims by Nato that their bases had been destroyed.

James Bays spent two days with the Taliban in Helmand and found that the group is running schools and medical facilities, and is travelling armed and unchallenged by Nato-led forces. Here is his report:

Behind Taliban lines, we travelled with a group of fighters across the deserts of Helmand province.

These hardened men are well-armed, ready for battle – and they told me they are ready for martyrdom too.

The journeys are often at break-neck speed – because of the risk of Nato air strikes.

Nato may be the master of the skies – but the Taliban claim that they control large swathes of territory on the ground.

They took us on a trip – to show us how they operate almost unhindered in many areas.

The group operates not only in rural areas but also towns such as Sangin.

We filmed along the main street, past the shopping bazaar.

There were Taliban fighters – with weapons – everywhere, and no sign of Nato or Afghan forces.

We filmed from a car occupied by heavily armed Taliban fighters, yet the vehicle drove straight past the compound housing the British troops based in the town.

The Taliban fighters claim the British are too scared to even leave their base.

The sound of aircraft can be heard – but the fighters are not afraid – they dismissively call the planes “Bush’s kites”.

And they claim soon they will soon be using a new anti-aircraft weapons.

For a time, there was confusion about our permission to film.

We were detained – and our telephones and camera were taken, but we were treated extremely well.

Those the Taliban find guilty of a crime are dealt with much more harshly.

This is the body of a man hanged by the Taliban.

They say he was a spy for the Americans – he was carrying an ID card from the US government development agency USAid.

We were also shown where Nato bombs have fallen.

While we travelled around, there were times when we were not allowed to film – because the Taliban do not want Nato to see pictures of the defences inside their villages.

And when the Taliban took us to a mass rally clearly arranged for us to film, it was somewhat unnerving standing in the desert with such a large group – over 400 Taliban fighters.

They were even youngsters holding weapons.

Some were no more than 12-years old while others carried their ammunition in UN food bags.

The district commander showed me all the land he claims is controlled by his men.

“Out of 100 per cent, the British don’t even control one per cent of Helmand,” he said.

He told me the Taliban is not just a military organisation – he said they have appointed a governor in Helmand  and it is now running medical clinics and madrassas, or religious schools. 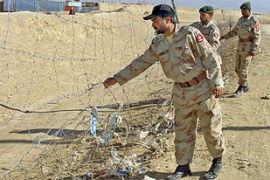 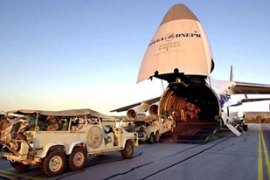 Plans come amid worries of spring offensive by al-Qaeda and Taliban fighters.