In nearby Pattani province, two elderly civilians, both Buddhists, riding on a motorcycle were attacked by pistol-toting men, police said on Sunday.
The two men were doused with benzene and set on fire, police said.
Pattani is one of three southernmost Thai provinces where more than 2,300 people have been killed in a three-year uprising.
Akara Thiproj, an army spokesman, said on Sunday that the military has detained 130 Muslim suspects and sympathisers during a security sweep through Narathiwat and nearby Yala province since Wednesday.
Southern hot-spot
Earlier this week in Pattani, suspected separatists killed four people, including a district chief and an army colonel.
Elsewhere in the province, a soldier was killed and two others wounded as they clashed with fighters who set fire to a school.
Decades-old political grievances have rekindled violence in the south, with fighters claiming that the central government discriminates against Muslims.
Thailand is overwhelmingly Buddhist, but Muslims are a majority in the south of the country.

Civilians thought to be co-operating with the government have also been attacked by Muslim separatists.

Political shift
The government of Thaksin Shinawatra, the former prime minister, responded with force, imposing an emergency decree to boost its powers in the region and cracking down hard on suspected fighters.
Thaksin was ousted in a coup in September 2006 led by Thailand’s first Muslim army chief, raising tentative hopes that tensions in the south could be eased.
The military has recruited local people, both Muslims and Buddhists, to join army-trained units, hoping their familiarity with the geography and local people could give the government an edge over the groups behind the attacks.

But the army-appointed government’s fledgeling peace drive has drawn little response, and fighters appear to be intensifying attacks. 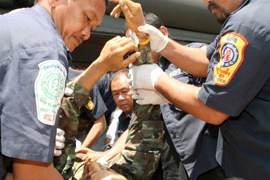 Roadside bomb kills seven in latest of a series of attacks to hit troubled south. 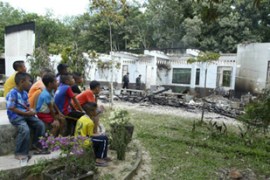 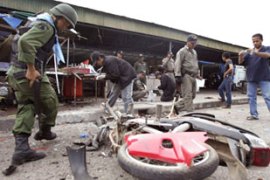