Protesters marched silently through the city, waving Turkish flags and carrying posters with the pictures and names of soldiers killed fighting the PKK.

“No to terror” and “We are all martyrs for this country” read the demonstrators’ placards.  Police and organisers did not give figures but reporters estimated the crowd at around 2,000.

Violence in the mainly Kurdish southeast has escalated in recent months and dozens of soldiers and paramilitary police have been killed.

Army figures on Saturday showed that guerrillas carried out 76 attacks with mines or other explosives in the past six months.

The PKK, blamed for a deadly suicide bombing in Ankara last month, has been fighting for a homeland since 1984.

The armed forces have called for an operation into northern Iraq to deal with separatists based there and a large attack could increase pressure on the government to agree to one.

In a statement earlier this month, it vowed to respond to attacks as necessary and urged Turks to show a mass response to the violence.

Tayyip Erdogan, Turkey‘s prime minister, who faces an election next month, has said he agrees with the army over northern Iraq, and has said an operation may be launched if necessary, but has not reconvened parliament to approve such a move.

Erdogan was quoted as saying on Saturday that Ankara was waiting for a response from the US, which has said it opposes any operation in relatively stable northern Iraq.

“We are waiting for a response from Washington. After that I will call president [George] Bush. After that, according to the result, we will decide on what steps must be taken and take action,” he was quoted as saying by Vatan newspaper. 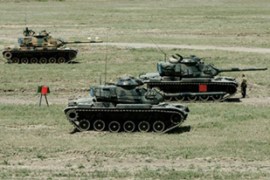 Turkish general does not rule out army incursion into Iraq to fight PKK separatists. 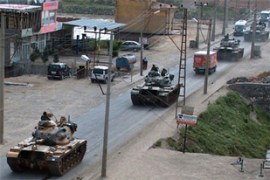