“It is a question of compatriots coming together to discuss national issues and charting a course that is in the best interest of the nation,” he said.

The general strike had halted most economic activity in Africa‘s most populous nation, but vital crude oil exports were not affected.

The price of petrol will remain frozen at 70 naira ($0.55) per litre for a year, up from the previous price of 65 naira per litre.

The increase is half the amount proposed by Yar’Adua’s predecessor Olusegun Obasanjo on the day he handed over power on May 28.

“It was president Yar’Adua’s personal intervention that halted the strike … after listening to all the parties and examining the issues of contention,” Olusegun Adeniyi, presidential spokesman, said.

The strike had forced the closure of schools, government offices, banks and filling stations.

Fuel price had soared to three or four times the normal price on the black market during the strike.

Virtually all domestic flights were grounded, with few nternational flights leaving the country. 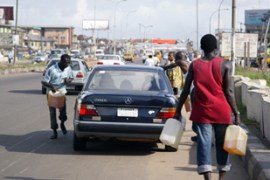 Unions warn they will cut power and water supplies after talks with government fail.

The unions say they will intensify the strike against fuel price rises.