Send us your views If you are in the Gaza Strip, you can also mail your opinions to:
Gazacrisis@aljazeera.net

The cabinet decision also clears the way for Israel to resume tax revenue transfers to the Palestinians, which are worth about $50m a month.

However, Palestinian officials from both Hamas and Fatah have criticised the Israeli decision, calling the release of the funds conditional and insufficient.

“Is Israel releasing the money for free? No. It is in return for Abbas destroying Hamas and the resistance,” Fawzi Barhoum, a Hamas spokesman, said.

Israel says courts have frozen some of the funds to cover Palestinian debts, but a senior Abbas aide said Israel should release the full $700m fund reserve.

Saeb Erekat said: “The Israelis should release all our money. These are Palestinian, not Israeli, funds.”

Olmert is likely to announce a wider package of measures to boost Abbas at a summit in Egypt on Monday.

Israel wants to isolate Hamas economically, diplomatically and militarily in the Gaza Strip, which Hamas seized control of more than a week ago.

Olmert said: “We will attempt in a sober and cautious manner to take advantage of the opportunities created as a result of the recent events in the Gaza Strip, in order to build a diplomatic process with the Palestinians.”

It was not immediately clear if the Israeli cabinet also approved proposals to ease travel restrictions for Palestinians in the occupied West Bank.

Speaking before his meeting with Abbas on Monday, Olmert said he would present Israel‘s security demands to the Palestinian president.

Hamas has not been invited to the meeting at the Red Sea resort of Sharm el-Sheikh, which will also be attended by Hosni Mubarak, Egypt’s president, and King Abdullah of Jordan.

Olmert said he would signal Israel‘s “readiness to co-operate with a new government that is committed to the principles of the international community”.

The Israeli prime minister was referring to demands by the Quartet of Middle East peace negotiators that Palestinians recognise Israel, renounce violence and abide by existing interim peace agreements.

Hamas has refused to accept the demands set down by the Quartet, whose membership comprises the US, Russia, the EU and the UN. 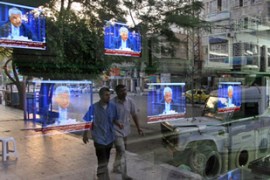 Haniya calls for talks with Fatah 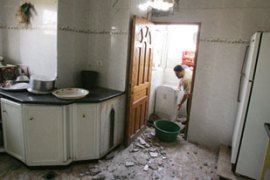 Abbas rules out talks with Hamas

Hamas denounces Palestinian president after he accuses group of plotting to kill him.