A wait of 10 years for the top job will end for Brown on Wednesday when he officially takes over from Blair as prime minister.

John Prescott is also following Blair in stepping down. The deputy leader of the Labour party is being replaced by Harriet Harman. But the justice minister will assume the position of Labour chair rather than the deputy prime minister role held by Prescott.

Brown received a ringing endorsement from the outgoing prime minister.

Blair, in a speech to introduce Brown, said his successor and “friend of 20 years” had every quality to make him a “great prime minister”.

The men vied to lead the party in 1994, but Brown was subsequently persuaded to stand aside, the two men have dominated British politics ever since in a sometimes fractious relationship.

Brown later returned the praise, citing Blair’s achievements which include helping to bring peace to Northern Ireland and saying his work was historic and enduring.

The 56-year-old Scot faced no challenge from fellow party members to replace Blair, and an opinion poll for The Observer newspaper on Sunday indicated his appointment could boost the party’s poll ratings and put Labour ahead of the opposition Conservatives for the first time since October.

Public disillusionment after a decade of Blair and anger over the Iraq war have meant Labour has dropped behind the Conservatives who have revived under youthful leader David Cameron.

Andrew Murray the chairman of the Stop The War coalition said: “We are here to wave goodbye to the most dangerous and warmongering prime minister in modern British history.”

Brown, however, gave no particular hint he would adopt a different  approach, even though Blair’s stance on Iraq arguably hastened his departure from office.

Echoing the outgoing leader’s philosophy in international affairs, he said defeating extremism went further than the sole use of military force.

“It is also a struggle of ideas and ideals that in the coming years will be waged and won for hearts and minds here at home and  round the world,” Brown said.

For her part, Harman promised a more open and accountable  government in a veiled criticism of Blair’s leadership.

“You want our plans to be debated and presented to parliament, not briefed and spun to the media,” she said.

Brown and his new party deputy are expected to face a first national election in 2009 or 2010. 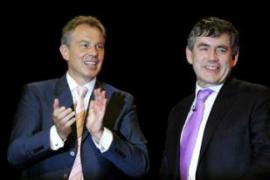 Few doubt Brown’s handling of the British economy, but image is another question. 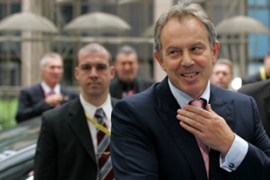 Talks are said to have focused on the Middle East conflict and the future of EU.