The Congress of South African Trade Unions (Cosatu) said on Friday it was unable “at this stage” to sign up to the package which Geraldine Fraser-Moleketi, the public services and administration minister, said would remain open for another month.
No to agreement
“The majority of public service unions agreed that they cannot at this stage sign any agreement with the employer,” Cosatu said in a statement after the latest round of talks broke up.
“The unions will meet again on Sunday 24 June” to discuss their  next move, the statement said.
The government has said the offer, up 0.25 per cent on what it had previously put on the table, is final.

The industrial action has led to the closure of most schools while hospitals have been able to run only skeleton services with the help of army medics.

Al Jazeera’s correspondent in Johannesburg, Kalay Maistry, said that hospitals have been struggling to cope with people coming in for treatment, with nurses and even refuse collectors not being at work.

Courts, which are already accused of being slow, have become even slower because their public services have joined the strike.

Educational services have come to a standstill, at a time when exams should be sat.

Maistry said: “All of these things are starting to snowball. Three weeks, no work, no pay, their pockets are going to be a lot lighter before the strike is over.” 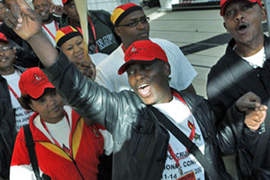 Kenny Govender, the government chief negotiator, said: “As government we made our position very, very clear when we tabled a final written offer. It is very clear in that it indicates the end of the line for government.”

The South African trade union federation, Cosatu, which helps to organise almost two million workers, said the government’s pay rise offer of 7.5 per cent for 2007/08, could be accepted by union members as early as Sunday.

On Wednesday, unions had cut their demands to nine per cent.

Fraser-Moleketi said: “We have signed already and we are waiting for the unions to sign. As soon as there is a 50 per cent majority of the unions that have signed then the new deal will take effect.”

South Africa‘s economy – the continent’s biggest – is booming but civil servants complain their wages barely keep pace with inflation, currently at 6.3 per cent.

Civil servants remain defiant, but the mass action has taken a heavy economic toll on their lives and some South Africans say they have lost loved ones because state hospitals are paralysed.

While some unions may accept the offer, others may stick to their demands. 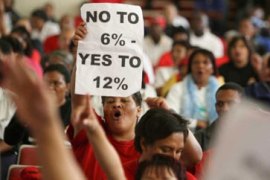 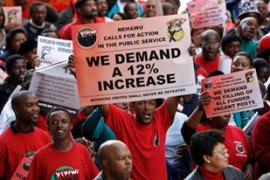 Civil servants’ national strike for higher pay cause turmoil across the country. 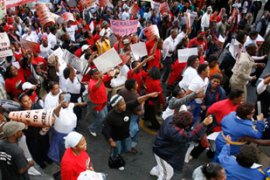 Union demands 12% increase in wages, double that offered by the government.