Police said the Buenaventura attacks began on Friday evening in a restaurant, which was destroyed by the blast.

The last explosion happened at daybreak on Saturday.

Colombia has received billions of dollars in US aid to crack down on the drug trade, but Democrats are imposing tighter conditions on aid as they say the drug trade has been arrested.

“Right now Buenaventura is Colombia‘s most strategically important hub for the export of drugs and the import of arms,” said Pablo Casas, an analyst at Seguridad & Democracia, a think-tank based in Bogota.

“The city is in turmoil due to a clash between guerrillas and paramilitaries fighting to control loads of cocaine leaving the country for Asia, which is becoming a large consumer, and the United States.“

After Colombia has attempted to destroy coca crops used to make cocaine, farmers have split their coca plantations into more diffuse areas, keeping production at a high level.

The government estimates that 600 to 700 tonnes of cocaine are exported from Colombia every year. 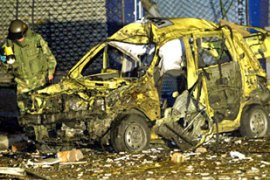