Exuberance about the booming private-equity industry overshadowed mounting criticism of the lavish lifestyles of senior executives from politicians, labour unions and the media.

The strength of Blackstone’s debut marks a coming of age for the once-secretive industry, as it joins Wall Street’s publicly traded top-tier investment houses.

Matthew Rhodes-Kropf, a professor of finance at Columbia business school, said: “This is a new breed of publicly traded financial firm.

“Once the market demonstrates its appetite for this type of investment, we’re going to see all the biggest and the best go public – even after the incredibly negative press it has generated.”

For those lucky enough to get in on the IPO – a difficult task since most shares were snapped up by big financial institutions and money managers – the stock barrelled past its $31 initial price. The shares closed up $4.06, or 13.1 per cent, to $35.06.

About 113.1m shares traded hands – almost the full offering of 133.3m shares. The deal’s underwriters did not exercise their option for extra shares, but are expected to do so early next week.

The offering is the biggest US IPO for a private-equity firm and the largest overall US IPO in five years. It could open the floodgates for other alternative investment funds to go public, with KKR and The Carlyle Group seen as the most likely candidates.

Blackstone’s flotation of 12.3 per cent of its management partnership gives investors no real voting rights or direct connection to its $88bn portfolio of companies and real-estate holdings. Among its investments are Universal Studios Orlando, Madame Tussauds wax museums and the real-estate giant Equity Office Properties Trust.

The firm reported a net profit on those holdings of $2.27bn in 2006, largely through what is known as “carried interest”. In essence, this is the money that the management firm earns based on the gains from the investments of its funds, and is generally 20 per cent off the top of the profits from those investments.

Rival buyout shops will likely want to mimic Blackstone’s approach, which provided Schwarzman and co-founder Peter Peterson with a clean way to unwind their stakes.

Unlike most IPOs where money raised boosts working capital to fuel expansion, the proceeds from Blackstone’s IPO went mostly to its senior executives so they could cash out their holdings.

In fact, the New York-based firm warned in a regulatory filing that it would not turn a profit for years to come because of high compensation expenses for its employees.

That did not stop investors.

Ryan Larson, senior equity trader at Voyageur Asset Management, a subsidiary of RBC Dain Rauscher, said: “There was heavy demand out there, especially because this came a week early, and it opened pretty much as expected.”

Peterson, 80, took $1.88bn in cash out of the IPO. He will retain a small stake in the company but is expected to retire next year.

Schwarzman’s heir apparent, Hamilton James, is expected to cash out to the tune of $147.9m from the IPO. He will still hold about five per cent of the firm even after his payout.

Other insiders that benefited included the Chinese government and insurance giant American International Group Inc. In May, China announced a $3bn investment in Blackstone, which is likely worth something closer to $4bn now.

AIG, a long-term investor in Blackstone, received partnership units worth about $1.74bn, though it may not be able to sell those until the end of 2009, according to regulatory filings. In addition, its investments in Blackstone funds was $1.18bn as of March 31, and its share of Blackstone’s income in the March quarter was $107m

The success of the deal was not to say Blackstone’s entrance into public life went without a hitch.

The New York-based buyout shop acknowledged on Thursday that it could face much higher taxes as early as next year if it is taxed as a corporation instead of as a partnership, as various bills in congress propose to do. That would effectively bring Blackstone’s tax rate to as much as 35 per cent, from 15 per cent now. 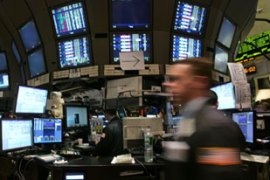