Triet has attempted to keep the focus of his visit on growing trade ties between the US and one of Asia‘s fastest-growing economies.

But during Thursday’s meeting on Capitol Hill he was repeatedly taken to task over claims by rights groups that Vietnam has increased repression of political activists and religious leaders.

Commenting on the talks afterwards to reporters, Republican congressman Ed Royce said human rights had been “overwhelmingly the dominant issue” of the meeting.

“We’ve got to see a stop to this conduct if this relationship is going to improve,” he said, adding Triet answered questions but was “very evasive”.

Members of congress have called on the US president to press Triet to end what they say are widespread human rights abuses in Vietnam.

In recent months, Vietnam has arrested or jailed at least eight pro-democracy activists, including a dissident Roman Catholic priest, Thadeus Nguyen Van Ly, who was given eight years in prison.

Meanwhile earlier this week Reporters Without Borders, a press freedom watchdog group, wrote to Bush urging him to intercede in his meeting with Triet on behalf of nine cyber-dissidents and journalists in prison in Vietnam.

The Vietnamese government insists that only lawbreakers are jailed.

Triet’s visit marks the latest stage in improving relations between the US and Vietnam since the end of the Vietnam War more than three decades ago.

The two countries normalised diplomatic ties in 1995, and since then dozens of US companies have joined the rush to invest in South-East Asia‘s fastest growing economy.

Six months ago the US normalised trading relations with its former enemy, paving the way for Vietnam to join the World Trade Organisation.

Now trade between the two countries has reached about $10bn a year.

Hoping to see that grow yet further Triet is leading a delegation of more than 100 Vietnamese businessmen on his visit to the US.

On Thursday, he signed a trade and investment framework agreement with the US deputy trade representative – a deal seen as a precursor to an eventual free trade agreement between the two countries.

But activists are determined not to let the improving ties or growing trade overshadow human rights concerns.

Diem H Do, chairman of the Vietnam Reform party, a group banned in Vietnam but active in overseas Vietnamese communities, said members would stage a pro-democracy rally near the White House when Triet visits. 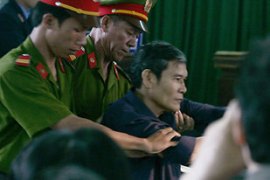 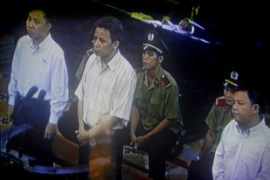 Lawyers are convicetd of spreading propaganda against the state.