“I believe the process goes in the right direction.”

The visit, which came at the invitation of Pyongyang, will be the first to North Korea by International Atomic Energy Agency inspectors since they were kicked out by the communist country’s leader Kim Jong-Il in late 2002.

Christopher Hill, the US envoy, earlier described as “useful and positive” talks on a rare visit to the reclusive state and said Kim’s regime was prepared to shut down the Yongbyon reactor.

Hill, the most senior US official to visit North Korea in nearly five years, said they had agreed on the need to swiftly implement a disarmament accord drawn up earlier this year.

“The DPRK indicated they are prepared to promptly shut down the  Yongbyon facility as called for by the February agreement,” he said in Seoul after his two-day visit to Pyongyang.

“They also said they are prepared to disable the Yongbyon facility,” he said.

In Pyongyang, Hill met with Pak Ui-Chun, North Korea’s foreign minister, and Kim Kye-Gwan, its chief envoy to the six-nation forum  that drew up the February 13 accord.

Under that agreement, hammered out after a surge in tensions following the North’s first nuclear weapons test last year, Pyongyang promised to shut down the plant in return for energy aid and diplomatic concessions. 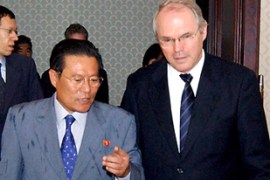 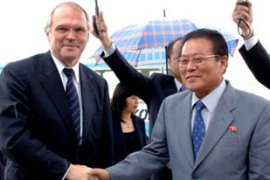 US nuclear envoy arrives in Pyongyang to be informed that talks are on hold.