Other reports put the death toll for the night’s violence at as high as 22.
Mau Mau influence
Once only a religious group who embraced traditional rituals such as female circumcision, the Mungiki sect has fractured into a politically linked gang.
Mungiki claims to have thousands of adherents, all drawn from the Kikuyu, Kenya’s largest tribe.
The group, whose name means “multitude” in the Kikuyu language, was inspired by the 1950s Mau Mau rebellion against British colonial rule.
In recent years, it has been linked to extortion, murder and political violence.
The group’s founder, Maina Njenga, who has publicly denied links to Mungiki recently but who is widely believed to still be a guiding force, was sentenced to five years in prison Thursday on gun and drug charges.
Banned in 2002 following deadly slum violence, the gang is notorious for criminal activities including extortion and murder.
Leaflets circulated by the group call on Kenyan youth to join up and prepare for an uprising against the government.
“Arise! Arise! Arise!” one of the leaflets says. “Stand up for your rights now.”
Hundreds of people fled a shantytown in Kenya’s capital earlier this month, where at least 33 people were killed during a police crackdown on on the Mungiki group.
Political control
Meanwhile, a Mungiki leader said the government crackdown has done nothing to stop the secretive group, which makes money by demanding protection payments from minibus drivers.
It also controls illegal businesses that produce homemade alcohol or provide electricity to slum areas by rerouting the circuits.
The minibuses, known as matatus, are the main form of public transportation in Kenya.
“Nothing has changed,” the leader told the AP news agency, insisting his name not be published because he is wanted by police.
“Most politicians in this area are affiliated with us in one way or another.”
Source: News Agencies 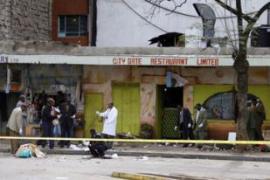 At least one killed and dozens hurt in Nairobi central business district explosion. 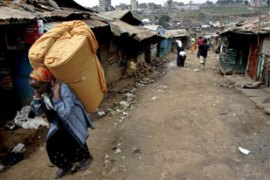 Hundreds of residents leave a Nairobi slum as police move against criminal gang. 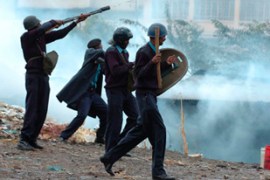 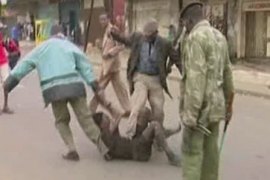