Commenting on Talabani’s visit Qin Gang, the Chinese foreign ministry spokesman, said China was ready and willing to participate in the reconstruction of Iraq.

“We hope Iraq can realise security, stability and development at an early date and the Iraqi people can enjoy stable life as early as possible,” he said.

Qin did not give any details of the debt agreement, other than to say China hoped to cancel a “large margin” of the funds owed by Iraq.

Iraq owes China about $8 billion, according to Iraq‘s finance minister, part of the roughly US$60 billion in foreign debt accumulated during the Saddam Hussein era.

On Thursday the Iraqi president held talks with his Chinese counterpart Hu Jintao, although official reports on their talks did not mention any discussion of the rising violence in Iraq.

Talabani is accompanied on his visit by a large delegation of senior ministers – a sign, he said, of Iraq‘s desire to boost ties with Beijing.

“In Iraq, we look on the achievements of China as an achievement for people seeking freedom and independence throughout the world,” he was quoted as saying during the meeting.

Al Jazeera’s Beijing correspondent Melissa Chen says one of the major areas of interest for China is access to Iraqi oil.

China already imports 58 per cent of its oil from the Middle East, and is keen to secure oil exploration deals in Iraq to ensure a steady supply of oil for its energy-hungry industries. 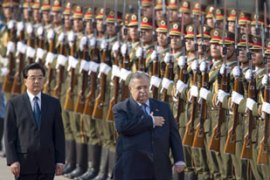