US and Iraqi forces also discovered several weapons caches on Wednesday, including four improvised bombs in homes and another 10 bombs buried underground, a US military statement said.

Two suspected fighters were killed while planting roadside bombs in a village just outside the province, the statement said.

Bednarek said: “The people of Diyala are tired of the terror and violence these al-Qaeda thugs have brought to their province and are co-operating with us in order to root them out.”

In the first day of the operation, named Arrowhead Ripper, US and Iraqi forces killed several alleged fighters, as well as uncovering weapons stores.

“Our forces killed 11 terrorists and arrested 12 in Baquba,” Colonel Najib al-Salahi of the Iraqi army said on Tuesday.

“We also confiscated weapons and equipment, including swords used for cutting off people’s heads.”

Opposition fighters have recently set up bases in areas around the capital, particularly Diyala, taking advantage of US forces’ primary focus on the capital.

Fighters based in Diyala have launched attacks which often combine ambushes, roadside bombs and snipers.

At least 7,500 US soldiers and 2,500 Iraqi troops are taking part in the operation in Baquba. 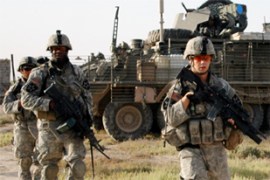 US forces in major Diyala offensive

Up to 10,000 troops in operation against al-Qaeda in Iraq and other Sunni fighters.