“Ingrid is not dead,” he said on Saturday. “She is well in body and mind, but it is impossible to send further proof that she is alive because of military operations in the area.”

Betancourt, a senator, was running for Colombia‘s presidency when Farc kidnapped her and a campaign aide on February 23, 2002.

Members of her family, many of whom live in France, prevailed on Sarkozy to persuade Alvaro Uribe, the Colombian president, not to rescue her by force, for fear that she would be killed.

At Sarkozy’s request, Uribe released Granda from a 21-year prison sentence on June 4, when the rebel leader moved into the residences of Bogota‘s archbishop.

Granda is the second person to have reported seeing Betancourt, 45, in recent months, after a police officer, one of 56 rebel hostages, managed to escape and said she was alive.

After much speculation that Granda had been released to negotiate a swap of rebel hostages for some of the 500 imprisoned rebels, he said that his Farc superiors had not authorised him to do so.

However, he reiterated Farc demands that Uribe clear two municipalities of all military presence, creating an enclave where rebel and government negotiators can safely agree a swap of prisoners for hostages.

According to AP, Granda said that three kidnapped US defence contractors and dozens of other hostages held by Colombian guerrillas must be swapped for all the fighters held in US and Colombian jails.

The agency quoted him as saying that the rebels would not consider piecemeal negotiations or prisoner swaps for the hostages.

“If the gringos want an agreement, then they must send back those rebels in prison in the US,” Granda said in an interview on Saturday.

“I understand the US government did similar swaps in return for captured Americans during the Cold War, so I don’t see why they can’t do it in this case.”

US contractors, Marc Gonsalves, Keith Stansell and Thomas Howes, were kidnapped in 2003 when their aircraft went down in southern Colombia as they were carrying out an intelligence-gathering mission. Farc calls them prisoners of war and accuses them of spying for the CIA.

Granda also said he would soon make a brief trip to Cuba, without indicating what he planned to do there. Since December 2005, Cuba has hosted exploratory contacts between Farc and Bogota.

“I’ll leave [Colombia] and return later. I’m going to Havana, although I still don’t have an exact date or time” Granda said, adding that the Farc leadership had authorised his visit.

Farc rebels imprisoned in the US include commander Nayibe “Sonia” Rojas, convicted earlier this year in a US court of exporting cocaine.

Another commander, Ricardo Palmera – better known by the nom de guerre Simon Trinidad – is awaiting trial on charges of kidnapping the three contractors and drug-trafficking.

The US has so far ruled out releasing the two imprisoned guerrillas. While both private contractors and the US military are helping search for the abducted Americans, the US has limited its statements on the three to say that their welfare is the responsibility of Farc.

Fighting a five-decade civil conflict, the 15,000-strong Farc is holding about 60 high-profile hostages. In addition to the rebels in US jails, there are hundreds jailed in Colombia. 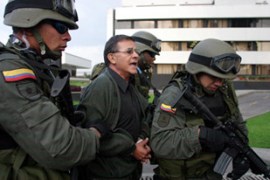