According to the official Xinhua news agency, more than 35,000 officers were mobilised to raid some 7,500 kilns.

“The labourers were enticed or sent by human traffickers to the kilns, but upon arrival were beaten, starved and forced to work long hours without payment,” Xinhua said.

The raids are the latest episode to cast light on the darker side of China‘s economic boom where incidents of forced labour in factories are being reported with increasingly frequency. 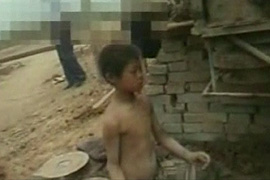 Child labour is thought to be especially common, particularly in the poorest and most remote parts of the vast country.

Video footage of those who were rescued or escaped showed groups of young children badly scarred from beatings and malnourished.

Reports quoted children saying they had witnessed workers being beaten to death for refusing to work or working too slowly.

The raids followed a national uproar sparked by internet reports on the efforts of 400 fathers to track down missing sons they believed were sold to kilns.

In an open letter, the fathers accused the authorities in Henan and Shanxi of ducking responsibility and turning a deaf ear to their pleas.

They said around 1,000 children were being forced to work at kilns under extremely cruel conditions.

He says that between 120 and 200 million people have moved out of the countryside to find work in cities, but most are not legally registered in their new homes.

That makes it all too easy for people, particularly children, to disappear through the gaps.

On Thursday, a report in the Southern Weekly newspaper quoted one mother as saying she had checked more than 100 kilns in the search for her 16-year-old son who went missing in March.

She told the paper that at every one she saw children forced to work and had since come across other families searching for missing children.

The report said families had reported children disappearing at train stations, walking home from school or out shopping.

It said sometimes children were told they could make money and were tricked into going along with kidnappers, while others were reportedly drugged before being sold into slave labour at the kilns.