Woolmer, 58, was found unconscious on March 18 in his hotel room in Kingston, Jamaica, a day after his team was eliminated from the World Cup in a humiliating loss to Ireland.
The authorities first said a preliminary autopsy was inconclusive, but four days later announced Woolmer had been strangled.
Police then launched one of the biggest murder investigations in Jamaica’s history, questioning nearly 400 people and taking voluntary DNA samples and fingerprints from potential witnesses including players from Pakistan and other World Cup cricket squads.
Thomas said: “No substance was found to indicate that Bob Woolmer was poisoned.”
He told reporters that a British pathologist reviewed the Jamaican coroner’s report and concluded that he died from unspecified natural causes, not strangulation.
“The Jamaican Constabulary Force accepts these findings and has now closed its investigation into the death of Mr Bob Woolmer,” he said.
Suspicions
Earlier in the week, a spokesman for the Pakistan World Cup team said Jamaican police could face legal action as the original murder claim had cast suspicion on the country’s players.
Pervez Jamil Mir told AP: “The name of Pakistan has been maligned and the names of Pakistani cricketers have been maligned because everyone became a suspect.”
Woolmer’s widow, Gill, welcomed Tuesday’s announcement, saying she was relieved to know that her husband had died of natural causes.
A final report on the cause of death will later be issued by a Jamaican coroner.
Source: News Agencies 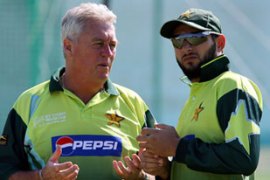 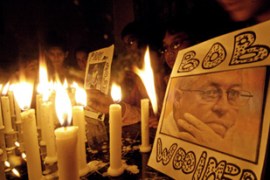 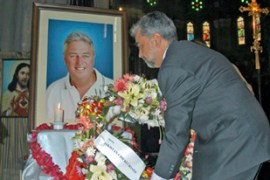 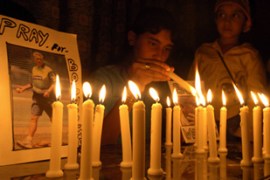