Sri Lanka’s ongoing conflict, which has claimed tens of thousands of lives, has seen an increasing number of civilian disappearances. The government and the Tamil Tigers blame each other.

Al Jazeera’s Tony Birtley reports from Sri Lanka, where human rights groups say more than a thousand people have either vanished or been abducted in the past year alone, most of them Tamils.

In a police station in eastern Sri Lanka, six, seemingly ordinary teenage girls wait to be processed. Their short hairstyles mark them out as female fighters in the Liberation Tigers of Tamil Elam.

The girls say they were forced to fight for the Tigers.

“I was walking with my mother going to see my grandmother,” one of the girls told Al Jazeera. “Then the LTTE attacked my mother and took me away.”

Pushpu, another of the girls, says she was taken three months ago as she tended her parents vegetable garden.

Most of the girls are about 16-years-old. Pushpu is only 14.

The girls were trained to use machine guns and dig bunkers in an area called Thoppigala, bombarded daily by the Sri Lankan army. They say they ran away because they could not bear the hardships of life with the Tigers.

They say they are innocent victims and that they just want to go back to school, but first they will either be sent to jail or for rehabilitation.

The girls’ stories are part of a growing problem in Sri Lanka, where a wave of abductions and assassinations have swept the country, blamed on everything from politics to death squads and criminals.

In the east of the country the activities of a Tamil group led by Colonel Karuna, a former LTTE leader, have come under scrutiny.

He has started a political party and now his political opponents have disappeared, but there is no direct evidence against him.

Very few families are prepared to talk about the growing number of abductions.

One woman, though, did speak to Al Jazeera. Her 29 year old son, a rickshaw taxi driver, was taken away by two men nearly a year ago. Nothing has been heard since.

“Every time I hear of a dead body I go to the police,” she said. “I just want to know what happened. But the police don’t help.”

Keheliya Rambukwella, a government spokesman for defence and national security, denied any government complicity in the abductions. He said some of the disappearances were due to “revolutionary groups” and others to “gangs, fighting and drug abusers”.

“The major hue and cry that they [families of the victims] are making is not the reality,” he said.

Professor Sivasubramaniam Ravindranth, the vice Chancellor of the Eastern University in Batticaloa, disappeared after attending a conference in Colombo last December.

“We haven’t got even a single call or nothing. We didn’t know anything where he is or whether he alive or not,” Dushyanthi Malaravan, his daughter, told Al Jazeera.

“But we hope because they can’t do anything to him because he is a very kind man, polite, he talks a little but … no words to say,” she said, falling silent.

Mano Ganesan, a member of parliament for Colombo, Sri Lanka’s capital, and the convenor of the Civil Monitoring Commission, said: “The government has appointed certain investigating commissions, but all these are cosmetic at the moment.”

He said the commissions had “not helped”.

“Most of these commissions appointed for investigation are only considered as buying time because this government has one and only agenda. That is a war agenda,” he said.

The government commissions set up to investigate the disappearances are criticised as being ineffectual and with people too scared to give evidence, any case would be difficult to prosecute. 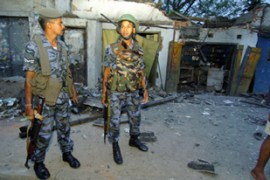