But while Leterme’s platform of more power for regional bodies goes down well in Flanders, he has in the past angered French-speakers in the southern region of Wallonia by disparaging their failure to learn Dutch.

While perfectly bilingual thanks to his francophone father and Flemish mother, it is far from certain that Leterme, a lawyer by training, will be able to bridge the linguistic divide in Belgian politics and life.

Although the Flemish Christian Democracts look set to play the key role in the next government, a round of tough horse-trading is likely before a coalition is agreed, which can take months.

The Christian Democrats’ likely election success would allow them to regain the dominance they have held over Belgian politics for most of the post-war period, and which Verhofstadt interrupted with his two terms.

But after eight years in office, his Flemish Liberal Democrats have slumped in the polls to a humiliating fourth place in Flanders despite delivering sound economic growth over most of the period.

The latest polls put his party not only behind the Christian Democrats, but trailing behind the far-right Vlaams Belang, or Flemish Interests party, and the Flemish Socialists. 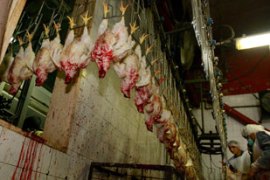 EU chickens to get minimum rights

The measures must be implemented by all 27 member states by June 2010.