Politicians from the Netherlands’ Christian Democrat and Christian Union parties, two members of the ruling coalition, called for the show to taken off the air.
But the programme has not been banned.
BNN, a channel aimed at young people, is screening the show on the fifth anniversary of the death of its founder, Bart de Graaff, who died after waiting seven years for a kidney donation.
Reality TV
The reality TV show focuses on Lisa, a woman dying from a brain tumour.
Lisa must decide which of three patients, selected by the producers, should receive her kidney. At the same time, viewers can offer their opinions by SMS text message.
The project has also caused an outcry outside of the Netherlands.
In Brussels, a spokesman for the European Commission, which on Wednesday was due to make proposals on how to reduce organ donor waiting lists, said the show was in “pretty bad taste”.
The Dutch Kidney Foundation welcomed the attention BNN had brought the subject, but noted that “their way of doing it is not ours, and it will bring no practical solution”.
Controversy
This is not the first time BNN has courted controversy. Previous broadcasts include “Sex, a user’s guide”, a series of educational programmes, and “Shoot up and swallow”, a series dedicated to sex and drugs.
In the Netherlands, organ transplants are subject to strict laws, which prohibit donors from choosing who will receive their organs after their death.
But an exemption is made in the case of kidney transplants, as these can be carried out while the donor is still alive, allowing the donor to choose the beneficiary.
The Big Donor Show was created by Endemol, the Dutch production company behind Big Brother and other reality television shows.
Source: News Agencies

The alleged racism faced by actress Shilpa Shetty has led to protests in India. 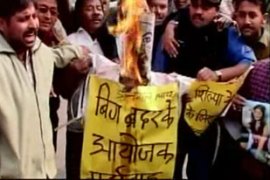