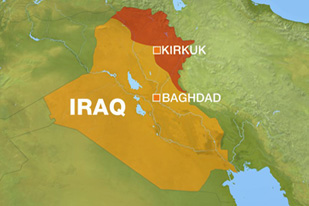 Kirkuk’s fate will be determined through a
referendum this year

A draft law being considered by the Iraqi parliament would enable US companies to take control of Iraq’s oil industry, oil experts in the country say.

The proposed bill, approved by the Iraqi government in February after months of wrangling, opens the country’s oil sector to foreign investors 35 years after it was nationalised.

“The law is designed for the benefit of US oil companies,” Ramzy Salman, an Iraqi economist who worked for the Iraqi oil ministry for 30 years, said.

“If approved, it would take things back to where they were before the nationalisation of Iraq’s oil in 1972.”

But he said the situation would be reversed when Iraqis regained their “true sovereignty”.

Salman said: “If there is something that should be worked on, it is the [Iraqi] constitution.

“The constitution contains serious gaps in terms of who is in charge of the oil and its revenues … [despite the] oil in Iraq being under every Iraqi river, desert, marsh and farm.”

PSAs are normally ideal for poorer countries exploring virgin lands or wanting to extract oil from fields where the resource is well below the surface and are designed to protect investors from the risks involved in such exploration projects.

But Iraqi oil experts say investors face virtually no risk, as the country’s oil is the cheapest to extract worldwide, and is of such a high quality that it sells at a premium on world markets.

He said: “An oil barrel in most of Iraq’s oilfields costs between 50 cents and one dollar to extract. Iraq’s fields are also proven, and investing in them is risk-free.

“These kinds of agreements are normally given when there is a risk, as the case in Sudan, Yemen and several other countries, where companies invest money with great risk that they would not find oil, or they find difficult to extract oil.”

Al-Chalabi said PSAs were a highly profitable formula for oil companies and in many cases they were granted for “political reasons”.

Under no circumstances would Iraq relinquish its authority, its responsibility and its control over Iraq’s natural resources”

“In the 1990s, the government of Saddam Hussein gave PSAs to Russian and Chinese oil companies, but it was more of a political decision than economic,” al-Chalabi said.

“The US and its allies lobbied in the 1990s against Iraq in order to tighten UN sanctions, while Iraq was betting on Russia and China to help remove or at least ease the sanctions.”

He said the contracted Russian and Chinese oil companies were mostly government-owned.

The 12.5 per cent profit protected by the new law is also disputed by many as being too low.

Al-Chalabi said the percentage was excessive given current oil prices.

“Iraq’s PSA with the Chinese and Russians gave a profit percentage less than 10 per cent when the oil barrel price was around $25, but now the barrel is over $60 which means the percentage of 12.5 per cent is too high,” he said.

The draft law would give Iraq’s provinces a free hand in giving exploration and production contracts, which some fear will lead to a decline in the authority of the central government over the country’s main resource.

Observers say that if the new law is approved, it will also encourage separatists in the oil-rich provinces to split off.

Eventually the break-up of Iraq would be impossible to prevent.

Dhafir al-Ani, an Iraqi member of parliament, said: “The proposed oil law is the best possible in the current situation.

“However, if there are some gaps in it, then the reason is the constitution, which contains several controversial issues and needs to reconsidered.”

Iraqi officials insisted in a forum held in Dubai last month that the bill due to be submitted to parliament will keep the country’s oil wealth in Iraqi hands and benefit all of its warring communities.

“Under no circumstances would Iraq relinquish its authority, its responsibility and its control over Iraq‘s natural resources,” Hussein Shahristani, the country’s oil minister, told reporters in the United Arab Emirates.

Muhammad Bahr al-Ullom, who laid the early foundations of the current draft oil law when he served as Iraq’s first post-war oil minsiter in 2004, has told reporters that he is in favour of the new law. He said it would not put Iraq’s oil at the hands of foreign oil companies and it would not devide Iraq.

Al Jazeera.net contacted Bahr al-Uloom in Iraq and agreed with him to call a few hours later for a telephone interview. However, there was no answer to a telephone call at the appointed time or when subsequent attempts to reach him were made.

Kurds and the new law

Ashti Hawrami, oil minister for the Iraqi Kurdish region, said at the Dubai conference that the Kurds would reject any ammendments to the suggested law and that they would go ahead with deals they have already made, whether the law was approved or not.

Al-Ani agreed with Salman that the proposed law was a “political” deal to strengthen US allies in Iraq.

He said: “We are a democratically elected legistlative body, if we would blindly approve anything presented to us, then why are we there?

“I prefer we go home. We have increasing signs that the law is a political deal.”

Iraq’s Kurdish semi-autonomous region has already given PSAs to foreign oil companies, and is in favour of the proposed oil law.

The region may well gain control of the oil-rich governorate of Kirkuk through a referendum due to be held later this year.

If the new law is approved and the Kirkuk referendum came in favour of the Kurds, the Kurdish region would enjoy huge economic power.