Many of those wounded were in their homes at the time of the blast.

Another four people were killed and six wounded in a car bomb attack in Baghdad‘s district of Al-Alam.

A policeman was killed and another two wounded when a roadside bomb exploded near their patrol in the district of Adhamiya.

Also on Sunday, four American soldiers were killed in attacks south of Baghdad, while another two died from wounds suffered in operations north of the capital, the US military said.

The U.S. military said three of the soldiers killed on Sunday south of Baghdad had been hit by a roadside bomb. The fourth soldier was hit by “indirect fire”.

It was unclear exactly when the two soldiers who died on Sunday had been wounded.

The toll makes it a deadly weekend for American troops after four soldiers were killed in an explosion near their vehicle in Diyala province north of Baghdad on Saturday.

The soldiers killed on Saturday were assigned to Task Force Lightning, the US military said in a statement. A fifth soldier was wounded in the blast.

Diyala province, which lies northeast of Baghdad, has seen a spike in attacks on US and Iraqi forces since the start of a plan two months ago to pacify the capital.

US forces said they have captured a senior al-Qaeda leader and two others in a raid on Sunday morning in Baghdad.

The al-Qaeda figure was identified as “the gatekeeper to the al-Qaeda emir of Baghdad” and was linked to several car bomb attacks in the Iraqi capital, the US military said in a statement, without naming the captive.

More than 3,270 American soldiers have been killed in Iraq since it’s invasion in 2003. 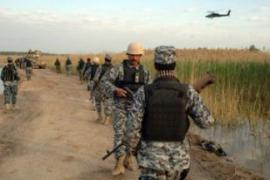 Attack comes in run-up to demonstrations marking four years since the fall of Baghdad. 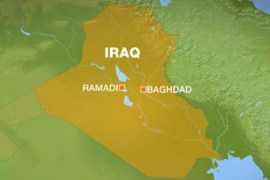 Attack in Ramadi said to have released chlorine gas besides inflicting fatalities. 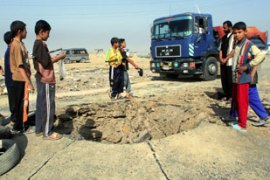 British, US and Iraqi soldiers die in a series of attacks across the country.