The eight-page, French-drafted resolution calls on Ban Ki-moon, the UN secretary general, to submit by mid-November a timetable for the gradual reduction of the force.
It also spells out in greater detail than before the UN role in achieving those goals and provides for the force to train Congolese armed forces and police in the observation of human rights.

It sets a cap on the UN force of 17,030 military personnel plus about 1,900 military observers, police and police trainers.

Jean-Marc de la Sabliere, the French ambassador to Congo, said in a statement: “This resolution is important because it adapts MONUC to the new needs of the DRC, and because it is oriented towards the future.”
The UN force, known by its French acronym MONUC, was first deployed in mineral-rich Congo in 1999. Since then, 98 peacekeepers have been killed.
Atoki Ileka, the Congolese envoy, said: “We would like MONUC to remain at full strength until the end of the year.
“In the short term, it’s good to have it, but in the long run it’s good to have an exit strategy.”
Continued violence

But violence has continued in Africa’s third largest country, with up to 600 people being killed in fighting in Kinshasa, the capital, in March between the army and forces loyal to Jean-Pierre Bemba, a defeated presidential candidate.
On Tuesday, Rwandan fighters killed four Congolese soldiers during clashes in a volatile eastern region of the country, according to a military official.
Delphin Kahimbi, the army’s second-in-command in Nord-Kivu province said: “These four soldiers, killed Friday and Saturday in clashes, are part of the former 81st brigade positioned at Ngungu.”
Until January, members of the 81st brigade were loyal to Laurent Nkunda, a renegade Congolese general who is wanted for war crimes allegedly committed by his troops in 2004.
Nkunda, a Tutsi who fought Rwanda’s Hutu-led military during the 1994 genocide, broke ranks with the Congolese authorities after the 1998-2003 war, saying he sought to protect ethnic Tutsis in the east from attacks by other population groups.
Source : News Agencies 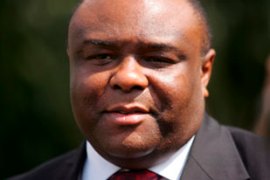 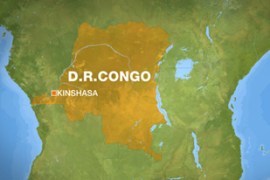 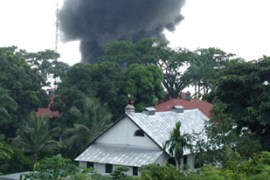 Government forces are urging opposition fighters to turn themselves in.