Wissam Othman is a 14-year-old Palestinian boy living in Shatila refugee camp in southern Beirut, Lebanon. Like most teenagers, he has dreams.

He wants to be a computer engineer, to travel. He also has smaller dreams – to visit central Beirut, to walk along the capital’s famous corniche. Most of all, he wants to finish school.

But it is unlikely that any of the wishes on Wissam’s list will come true.

No matter how clever he is, he will have to drop out of school next year because he has inherited his father Majdi’s legal status – zero.

“It is because I am a homeless Palestinian and the Lebanese government does not recognise me as a refugee here,” Majdi says.

Majdi is a “non-ID Palestinian refugee”, one of about 3,500 with no documents or ones that have expired.

Most of these refugees have lost their homes two or three times over, going from one country to another after their forced exodus from Palestine during the 1948 Arab-Israeli war – a flight Palestinians call al-Nakba (the disaster).

Many ended up in Lebanon in the 70s with no legal status as refugees.

“They can’t move freely. For many of them it has been 20 to 30 years and they have not been out of the camp for fear of being arrested,” she says.

Majdi cannot cash a cheque, own anything, or get a driving licence. He is also unable to go back to Jordan where he is registered as a refugee – all because he has no papers.

“I don’t feel I exist. Sometimes it is better to disappear from life. I feel as if I am a stranger even to myself,” Majdi says.

Majdi feels guilty, feeling he has inflicted the same fate on his son.

UNRWA, the UN relief agency, recently granted non-ID refugees limited access to its health and basic education services, but there is a long way to go.

“The ideal solution is to get [non-ID Palestinian refugees] registered in Lebanon as refugees, since they are living here anyhow,” says Chiha.

But the Lebanese government, already cash strapped after the bombing of its infrastructure by Israel in last year’s 34-day war on Hezbollah, says it cannot afford to take any more refugees.

Majdi believes the real solution is to return to his land in Palestine, but that is not going to happen any time soon.

With no documents, he will be stuck in the camp for the rest of his life, with not even a chance to see the Mediterranean Sea while walking along Beirut’s seafront.

Palestinian refugees in Lebanon who used to receive money from the Palestinian Authority have seen their payments stop. 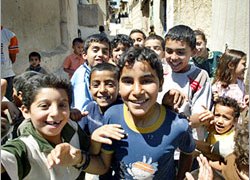 Palestinian refugees top the list of most displaced people in the world followed by Afghanistan and Iraq.