The judge later abandoned plans to address supporters in view of the violence in Karachi.

Another 100 people were wounded in the violence in Karachi.
Kamal Hyder, Al Jazeera’s correspondent in Karachi, said he had heard “sporadic gunfire” in the city.
New York-based Human Rights Watch said Musharraf’s government and its allies had apparently “deliberately sought to foment violence in Karachi”, adding that police stood by as “silent spectators”.
Imran Khan, chairman of the opposition Movement for Justice, said: “What we saw today in Karachi was terror on the streets to stop a peaceful procession to welcome the chief justice into Karachi.
“You had policemen standing aside allowing the ruling party gunmen to fire into the crowd.”
Meanwhile, Musharaff, addressing around 80,000 supporters at a pro-goverment rally in Islamabad, said: “This is a historical day… because I haven’t been to any gathering where I have seen so many people in support of the government’s policies.”

Speaking earlier in the day, Musharraf did not mention the Karachi violence, but ruled out declaring a state of emergency,

Opposition activists accused a pro-government party, the Mutahida Qami Movement (MQM), of attacking them with batons and gunfire as they attempted to greet the judge at the airport.

Chaudhry had earlier declined an offer from authorities to travel to the site of the planned rally in the centre by helicopter and so was stranded at the airport, as were hundreds of passengers from earlier flights.

Police and paramilitary troops began using cranes and bulldozers to clear the way, but it was unclear when the way could be opened.

Critics say Musharraf is sidelining the judge to head off legal challenges to his plan to seek a new five-year presidential term later this year.

The government maintains the move was not politically motivated and that Chaudhry had abused his office.

Two months of anti-Musharraf rallies across the country by opposition parties and lawyers have been gathering momentum and pro-government parties have now decided to respond with their own show of strength.

The authorities in Karachi said they have deployed 15,000 security force members in the city to maintain law and order.

But these efforts appeared to have failed as rival groups exchanged gunfire and a policeman and three opposition supporters were killed.

“One policeman was killed in a clash in the Korangi area of the city and at least 20 people have been wounded in other clashes between pro-Musharraf and supporters of the chief justice,” a security official said.

All three were involved in making arrangements for Chaudhry’s arrival in Karachi.

Also on Saturday, unidentified gunmen shot dead Suhail Qadri, 40, an activist from the Sunni Tehrik religious party that has a long running rivalry with the MQM.

Witnesses said that shipping containers, trucks and oil tankers had been parked on key roads in Karachi overnight, including those leading to the Karachi International Airport.

Pakistan International Airlines said on Saturday all domestic and international flights from Karachi were delayed because cabin crews could not reach the airport because of the roadblocks. 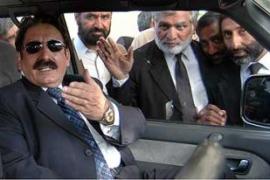 Crackdown ahead of Pakistan rally

Police detain hundreds on eve of a rally to be addressed by suspended chief justice. 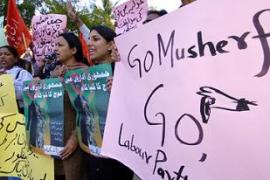 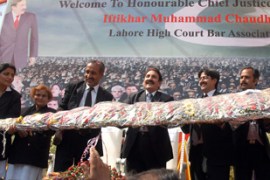