Kurbanguly Berdymukhamedov, the Turkmen president, said plans for a rival US-backed trans-Caspian pipeline that bypasses Russia had “not been completely dropped”.
Little chance
Khristenko said he believed there was now little chance of it going ahead.
He said: “Technological, legal and ecological risks are so big that it will be impossible to find an investor unless it is a political investor who does not care how much gas there is to pump through.”
Vladimir Putin, Russia’s president, said the deal meant “more supplies of energy resources to Europe and the world’s markets”.
Blow to West
The landmark deal to upgrade existing Soviet-era infrastructure, delivers a blow to US, European and Chinese hopes of siphoning the flow of Central Asian gas out of Russian hands.
The three states have issued joint declarations saying they would sign a treaty by September on building the new pipeline.
The trio will also work with Uzbekistan to improve existing Soviet-era Central Asia/Centre pipelines. The three former Soviet republics have sought to play down the diplomatic implications of the pipeline.
Source: News Agencies 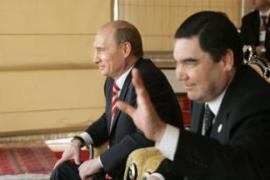 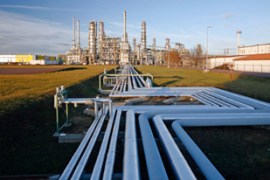 Putin in Greece for oil pipeline deal, while many fear Russian energy dominance.