“Now there is no reason why the process should not move ahead,” he told Reuters.
‘Historic responsibility’
In a statement issued by the tribunal office on Monday, the judges said the new fee structure would allow international lawyers, particularly those working pro bono, to represent clients at the Khmer Rouge tribunal.

A plenary session can now be convened to adopt internal rules for guiding the trials, the statement said.

The judges said that with the row now resolved they hoped the would “move forward without further delay, so as to discharge its historic responsibility to find justice for the Cambodian people”.
After nearly a decade of tough negotiations and many setbacks, the first trials of former Khmer Rouge leaders were initially expected this year.
But repeated delays mean trials are not likely to start until early 2008, officials say.
“Once the internal rules are adopted, the judicial investigation can start in the following weeks,” Lemonde said.
Killing Fields
Prosecutors will be able to file cases against those deemed most responsible for the atrocities of what became known as the Killing Fields in which almost two million people died of overwork, starvation, or were executed.
Rights groups and legal advocates have called for swift trials amid concerns that ageing Khmer Rouge leaders will die before being tried for one of the worst genocides of the 20th century.
Pol Pot, the so-called Brother Number One of the Khmer Rouge, died in his jungle hideout near the Thai border in 1998.
The only other person arrested for crimes committed during the Khmer Rouge’s 1975-79 rule, Pol Pot’s military chief Ta Mok dubbed “The Butcher” for his alleged role in mass internal purges, died in prison last year.
Likely defendants if the future trials are Nuon Chea, former Foreign Minister Ieng Sary, former president Khieu Samphan, and Duch, head of the Tuol Sleng interrogation and torture centre in Phnom Penh.
Source : News Agencies 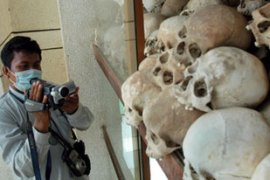