“When kids meet her in person, they want to talk to her and know what she likes and dislikes,” Goessling said.

“It’s amazing because she is so loving with people. She craves attention.”

Although Thumbelina’s tour around the US would test the endurance of any horse, her owners say that she’s already used to being the centre of attention.

“I’ll have her out for hours,” Goessling said.

“She’s so mild mannered, everything just seems to brush off her shoulders. There have been 100 kids around petting her and she’ll take a nap.” 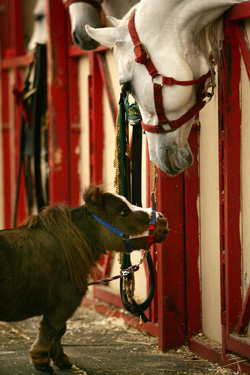 Thumbelina is good friends with much larger horses [GALLO/GETTY]

At the moment most of her days are spent playing with the farm dogs who are her best friends – and, like them, she even sleeps in a dog house.

Thumbelina’s owners say that they are determined to ensure that the mare, declared the “world’s smallest ever horse” by the Guiness World Records last year, will not become a circus act.

Michael Goessling said: “We don’t want to make a penny off of her.

“We never have. There will never be another Thumbelina.”

The tiny horse and her charitable foundation have helped raise about $10,000 for children’s charities since she gained world record status as the smallest horse ever recorded.

Much of the money has been raised from the sale of Thumbelina colouring book.

Thumbelina’s name comes from the Hans Christian Andersen fairytale of a woman the size of a thumb.