Visa plan
A draft plan by the White House, leaked last week, calls for a new “Z” category visa that would allow illegal immigrant workers to apply for three-year work permits that would be renewable indefinitely, but would cost $3,500 each time.
“Charging that much, Bush is going to be even more expensive than the coyotes,” said Armando Garcia, a protester, referring to the smugglers who transport people across the Mexican border.
To get a permit and become legal permanent residents, illegal immigrants would have to return to their home country, apply at a US embassy or consulate to re-enter legally and pay a $10,000 fine.
Critics of the proposal, which include Hispanic advocacy groups and unions made up of a large number of immigrants, argue the cost of work permits and the green card application, which could total more than $20,000, is prohibitive for low-wage earners.
Growing fears
Alfredo Gonzalez, an illegal immigrant from Mexico who marched on Saturday with his wife and daughter, said he feared the immigration raids occurring across the country.
“If they kick me out, who is going to take care of my daughters? The government? I don’t think so,” he said. “We need full legalisation and need it now.”
The recent proposal is more conservative than one passed by the senate last year, that would have allowed many of the country’s estimated 12 million illegal immigrants to stay in the US, work and apply to become legal residents after learning English.
They would also have been required to pay small fines and back taxes and clear a background check.
But the plan was unpopular with the then Republican-controlled House of Representatives.
Source : News Agencies 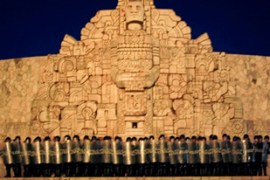 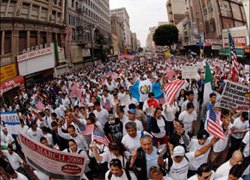 Outline of proposed US immigration bill

The US Senate has announced a breakthrough agreement on legislation to grant legal residency status to millions of undocumented residents in the United States. 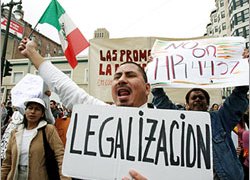 Breakthrough in US immigration bill

US Senate leaders have declared a breakthrough on a long-sought overhaul of the country’s immigration law, clearing the path to possible citizenship for millions of illegal immigrants, if among other things, they register for military service.

The US Senate judiciary committee has approved immigration legislation that will clear the way for 11 million illegal aliens to seek US citizenship without having to leave the country first.