Hamish MacDonald, Al Jazeera’s correspondent in Dili, said he heard gunshots on Sunday near the Australian embassy. UN police said these were fired by two drunk East Timorese soldiers who had been returned to barracks.

Jose Ramos-Horta, prime minister and a Nobel Peace Prize laureate, had initially been considered a sure winner for the five-year role of president, now held by Xanana Gusmao, the popular former resistance leader.

But many experts now say a run-off is almost certain. If that happens, a second round will follow next month.

Some 2,800 foreign troops and police officers and 3,500 election officials will oversee the nationwide polls. Tensions are expected to be especially high when results are announced on Wednesday.

The presidential post is largely ceremonial in East Timor, but analysts see Monday’s vote as a trial run for more crucial general elections in June that will determine the composition of a new government and parliament.

It will also gauge public support for a plan by Ramos-Horta and Gusmao, who will run for prime minister, to seize control of parliament from the powerful left-wing Fretilin party.

Dozens of people were killed and tens of thousands fled their homes before the collapse of the government.

Though international troops curbed the worst of the violence, analysts say the underlying causes remain unresolved – intense political and regional rivalries dating back to Indonesia‘s 24-year occupation, economic stagnation and a failure to bring to justice perpetrators of past crimes.

That has dented the confidence of some of the 522,000 people eligible to choose between eight candidates on Monday. 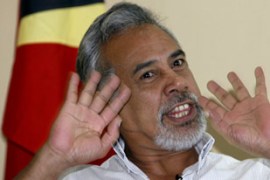 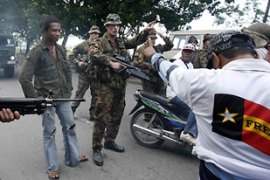 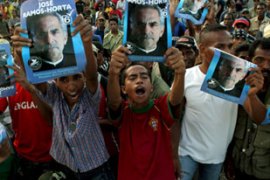 Supporters of rival candidates scuffle after campaign rally in the capital Dili. 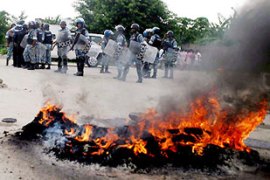 Eight candidates to fight for presidency amid sporadic unrest.