Wen’s comments come ahead of a three-day visit to Tokyo next week, the first by a Chinese premier in eight years.
Relations between Tokyo and Beijing ties soured under Abe’s predecessor, Junichiro Koizumi, who repeatedly visited the shrine despite China’s protests.
Relations have improved since Abe took office last September. He has not visited the shrine since become prime minister.
Wen has described the upcoming trip as “an ice-thawing journey” and emphasised the importance China placed on ties with Japan.
He expressed hoped that Abe will visit China later this year, Kyodo said.
Return trip

Yasuhisa Shiozaki, Japan’s chief cabinet secretary, said the possibility of Abe’s visit will be discussed during Wen’s trip to Tokyo.

“Of course we will consider this in a positive light,” Shiozaki said.
Both leaders are also expected to conduct negotiations over competing claims to gas reserves in the East China Sea during Wen’s trip.
Shiozaki said he hoped progress would be made after another round of talks on the matter last week ended without any agreement.
Both nations have been holding talks to resolve the dispute which began in 2004 as they attempt to develop new sources of energy.
Source : News Agencies 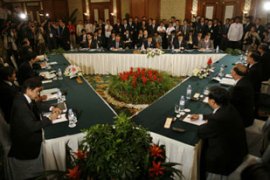 The Japanese prime minister has expressed remorse for the damage and suffering Japan inflicted on Asian nations in the second world war, hours after a visit to a controversial war shrine.