He was speaking publicly for the first time since the publication of the report in the sports daily L’Equipe on Friday and despite maintaining his innocence admitted his reputation had already been “tarnished” by the allegations.

Thorpe dominated world freestyle swimming for eight years prior to his retirement last year, when still only 24-years-old.

Bursting onto the scene as a teenage prodigy he went on to win five Olympic gold medals and became a sporting hero for many Australians. The country’s prime minister, John Howard, has even defended the former champion, describing the French report as a slur.

A tired-looking Thorpe said he had not slept the night before and described the shock he felt upon hearing of the allegations.

Fina, world swimming’s governing body, which did not name Thorpe, revealed on Saturday it was to reopen the case seeking clarification.

The Australian Sports Anti-Doping Authority (ASADA) insisted the had never been closed but emphasised there was no evidence of an anti-doping violation so far.

A test that was undertaken in May 2006 when Thorpe was in Australia returned unusual levels of testosterone and a hormone called leutenising hormone.

He said ASADA were in the process of writing to him to get “further medical information” when the story appeared on the L’Equipe website.

Thorpe said he was concerned that news of his test had been leaked.

“This is a serious issue not only for me but for all athletes.  We put a lot of confidence into this testing procedure and to know that information can be leaked is a serious breach of what we sign up for,” he said.

The swimmer has long been an outspoken critic of the drug testing methods used by Fina, saying it is not tough enough on cheating.

At the 2001 world championships, he complained that Fina should be testing blood for EPO and human growth hormone. Three years later at the Athens Olympics, he said it was naive to think that all swimmers are drug-free.

Thorpe said he did not think it was a coincidence that the test results were revealed during the world championships in his home country.

L’Equipe reported that ASADA threw out the case against Thorpe for lack of scientific proof. Fina then went to the Court of Arbitration for Sport, the highest tribunal in sports.

Any ban imposed on Thorpe were he ultimately to be found guilty of a doping offence would be meaningless in light of his retirement but the swimmer, known as universally as the “Thorpedo” said he would do everything in his power to maintain his reputation.

Joined at the press conference by his lawyer Tony O’Reilly, he said he was considering legal action.

“One is the test itself and then the second one is the legalities of what’s happened to my privacy, defamation, all of these different things I will definitely investigate.”

Besides his Olympic titles, Thorpe won 11 world championships and set 13 world records during his career. He still holds the world record in the 400m freestyle. 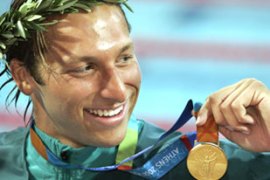