“We’re not looking for confrontation over this and actually the most important thing is to get the people back safe and sound. And if they [Iran] want to resolve this in a diplomatic way, the door is open.”

But later Blair warned Iran that if a negotiated solution was not reached Britain would “have to take increasingly tougher decisions”.

The two sides have both toned down their rhetoric in recents days after widepsread anger after the naval personnel were seized in the mouth of the Shatt al-Arab waterway on March 23 by Iranian forces.

Britain maintains that the sailors were carrying out routine anti-smuggling operations in Iraqi waters but Iran says that their global positioning system (GPS) devices show they entered Iranian waters.

Iranian state television has said that all 15 sailors and marines have given “frank confessions” but in a possible sign of rapprochement, it refrained from broadcasting sound on images of the sailors shown on Tuesday.

London has criticised the broadcast of the confessions saying the sailors had been under duress, while Tehran has been angered by British attempts to get the international community to condemn Iran.

“It is at the beginning of the path. If they continue on this path then logically conditions can change and we can go towards ending this issue,” Larijani said.

“From the start it was intended to resolve this affair through bilateral contacts and that the other side would recognise its error, but they behaved as if their violation of Iranian waters was something normal.”

Larijani did not directly demand an apology from the British government in his remarks but Prviz Davoudi, the vice president, suggested on Tuesday that this would be important in reaching a solution to the situation.

“London must give guarantees and say that there was a violation and there will be no other errors in the future. I think that the problem heading in this direction and god willing will be resolved soon,” he told reporters during a tour of the Bushehr nuclear plant.

Diplomat freed Meanwhile, an Iranian dilpomat abducted in Baghdad two months ago has been released.
Armed men in Iraqi army uniforms seized Jalal Sharafi, second secretary at the Iranian embassy in Baghdad, on February 4. Tehran has accused the US military of being involved, a charge the Pentagon has denied.
“I can confirm that he has been freed and is in good health,” Hoshiyar Zebari, Iraq’s foreign minister, said on Tuesday.

“We made tremendous efforts to free him. All sides had denied holding him, which made it more difficult. But we kept the pressure up on everybody.”
Iran’s official IRNA news agency reported Sharafi had already arrived back in Iran.
Source : News Agencies 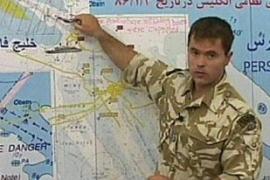 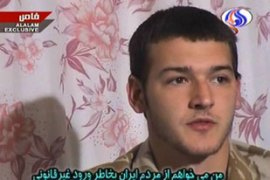 UK writes to Iran over troops 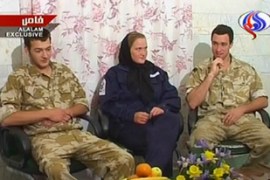